"I Congratulate Kitendawili, " Ruto Congratulates Raila After What He Said About August Elections 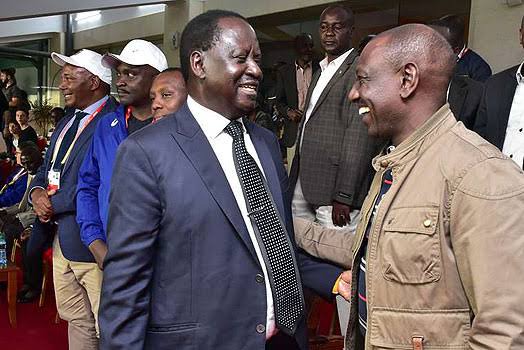 Deputy President William Ruto has expressed confidence that the August general elections will be peaceful after Raila Odinga, the presidential candidate for the Azimio la Umoja One Kenya Alliance, indicated that he will accept the outcome of the August 9 general election.

Ruto commended his chief political adversary for agreeing to accept the results of the Independent Electoral and Boundaries Commission's presidential election (IEBC).

"For the first time, the 'Kitendawili' man announced that he will accept defeat and go home if he is beaten in the August 9 polls. For the first time, I would want to thank my opponent on agreeing to accept the election results and concede,"DP stated.

Ruto stated that Odinga's action will ensure that Kenyans may vote without fear of violence erupting in the aftermath of the election.

Odinga indicated the day prior that he is willing to concede defeat in the August presidential election if he loses.

Odinga stated during a televised interview that he is a sportsman and will congratulate the election's victor.

Ruto has repeatedly mocked Odinga and dared him to state publicly that he will accept election results if he loses the August presidential elections.

Raila has contested the results of three presidential elections, in 2007, 2013, and 2017, saying he defeated his opponents.

Star Player To Undergo Medical Test Ahead Of Move To Premier League Club, News On Aubameyang

Arsenal Set To Complete Another Outgoing After Lucas Torreira.

Alego-Usonga MP Samuel Onunga Atandi Does It Again: Breaks the One term Jinx With Resounding Win