"You were perfect" Rachel Ruto congratulates her husband.

Deputy president William Samoei Ruto's wife mama Rachel Wangari Ruto has congratulated her husband who was yesterday stood in a presidential debate in Catholic University of Eastern Africa.Rachel has aknowledged her husband's mastery of words,his prowess in answering back questions that he was asked and his general knowledge on matters to deal with politics stating he was the last man standing. 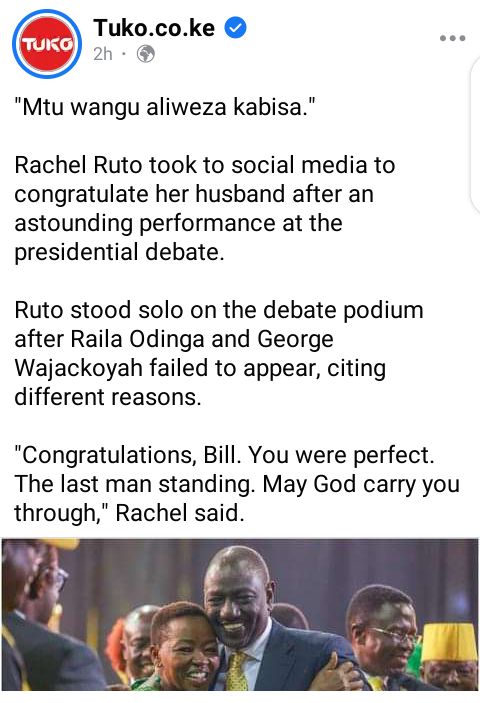 Rachel Ruto was among those who were present at the venue to see her husband tackle the presidential debate.Rachel says that her husband did tremendously well with the ways he tackled the entired debate that saw him battle alone.Among those who also came to witness for themselves were Ruto's children who are also proud of their fathers prowess in political matters. 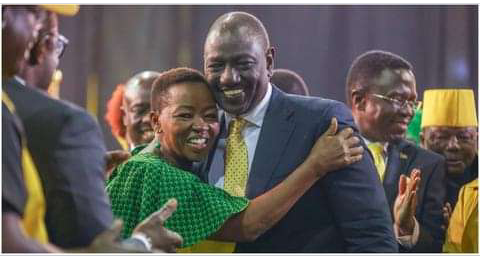 Ruto was expected to share the same podium with Azimio la Umoja's presidential aspirant Mr Raila Amollo Odinga who failed to show up due to claims that arguing with Ruto was just a waste of his time.Raila had earlier on had his excuse submitted saying that he would not take part in that presidential debate.Also to miss the presidential debate was George Wajackoya of Roots Party of Kenya who statedthat unless that debate would incorporate the four presidential aspirants he would not take part.True to his words he did not participate in the debate even after presenting himself.

Several of Ruto's allies have also come out to publicly congratulate the deputy President for the way he tackled the presidential debate stating he did them extremely proud.Among those to aknowledge Ruto's good work was his deputy aspirant Rigathi Gachagua,Ndidi Nyoro and Moses Kuria.Ruto has plans that would see this country reduce it's over reliance on debts,creation of jobs for the youths,empowerment of the low earners and full utilisation of the country's idle resources.

With just over 13days to the August General Elections politicians are having sleepless nights hunting for votes that would see them secure several seats that they desire.And the two political strongholds are also not being left behind as they have a series of rallies lined up in the country.

Cleanse your liver with turmeric and honey

Meet The Woman Who Was Born With Backward Hands And Legs, Her Lover Left Her After Getting Pregnant

Profitable Businesses That Can Earn You Good Return Monthly

Safaricom Have Been Authorized To Run Mobile Money In Ethiopia