Deputy President William Ruto's running mate, Rigathi Gachagua, stormed Nandi Hills Constituency where he called upon the residents to support him and the DP in the August presidential race.

Gachagua had earlier held an economic Forum in Eldoret where the residents listed their challenges and what they want the Kenya Kwanza Alliance government to do in case they win in the August polls.

Speaking in Nandi Hills, Gachagua affirmed that he and Ruto among others leaders in the KKA team are ready and willing to serve the residents as soon as they are sworn in.

Elgeyo Marakwet Senator Kipchumba Murkomen who accompanied Gachagua, first thanked the Mathira member of parliament, for being loyal to Ruto despite the challenges he had gone through over his political affiliations.

Murkomen assured Gachagua that the Rift Valley Region residents will support them until they make it to State House. 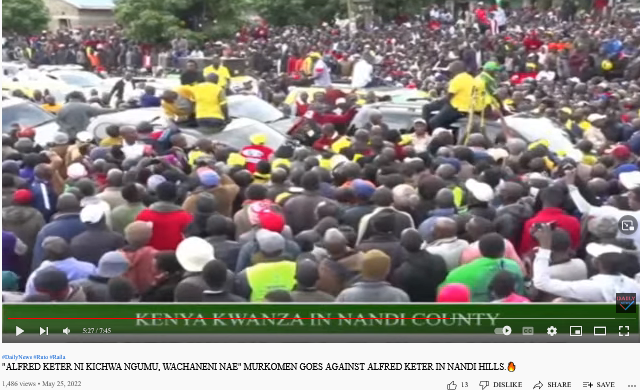 On local politics and more so Nandi Hills Constituency politics, Murkomen dismissed Alfred Keter's bid saying that he has not met the expectations of the residents and has been unable to push for development in the constituency.

Keter was eyeing the UDA party ticket, and despite wining the nominations, his win was disqualified on claims of irregularities during the exercise with the UDA nomination ticket being issued to Bernard Kitur.

Keter however announced that he would be seeking a re-election as an independent candidate.