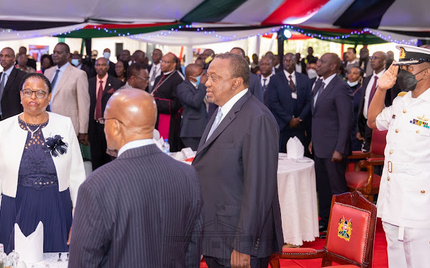 Despite President Uhuru Kenyatta and his Deputy William Ruto 'seemingly' putting their political differences aside, and shook hands during the 19th National Prayer Breakfast at Safari Park Hotel on Thursday May 26, their sitting arrangements caught the attention of Kenyans.

Contrary to the previous prayer functions when the duo shared tabled, each of them had their own table during the Thursday's event.

The president shared his table with the Attorney General Paul Kihara and Chief Justice Martha Koome, while Ruto shared his with the Speaker of the Senate Ken Lusaka and his counterpart from the National Assembly Justin Muturi.

Speaking with TV 47 on Thursday evening, the National Assembly's Majority Leader Samuel Poshisio argued that UhuRuto's siting arrangement was driven by the fact that the duo are not in the same political party, and everyone is now chanting their own route as far as the August polls is concerned.

"I think we are now at a time when the president is preparing to retire, so he and Ruto are not on the same page. One is on this side, and the other is on the other side. Ruto is now on a different political party, and the president has to remain aside in a position where Kenyans can reach him fast," he argued. 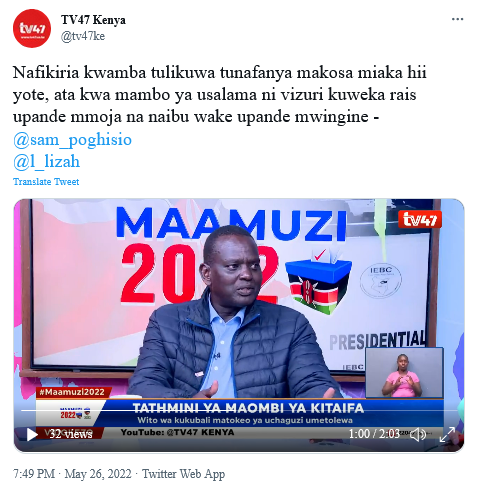 The West Pokot Senator further claimed that such a move should have been taken when the two leaders fell out, arguing it also attracts discussions on security.

Ruto asked for forgiveness from his boss for failing short of his expectations, as Uhuru wished the best of luck to leaders eyeing seats in the August polls assuring Kenyans that he will pass the baton to whoever will be elected as the president.

"Congratulations..." Kenyans Join Boni Khalwale in Celebrating the Birth of a New Grandchild

Kositany Alleges People Who Can Not Ran Away From KEMSA, State Capture And Illegal Sale Of Ports