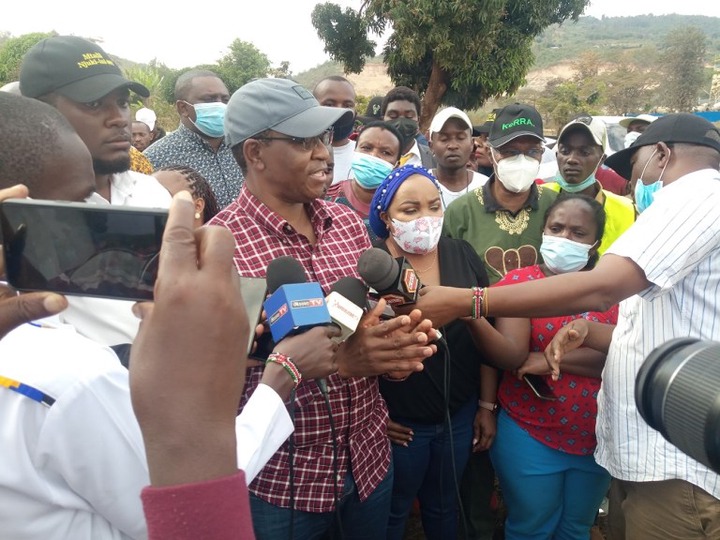 Interior PS Karanja Kibicho has warned politicians in counties neighboring Kirinyaga who intend to wreak havoc during Mashujaa Day celebrations not to approach the area.

Kibicho claimed that intelligence reports indicate that these politicians are recruiting young people to be transported to Wanguru Stadium, the location of this year's Mashujaa Day celebrations, to disrupt the party.

Speaking in the villages of Ngaru and Riamugaa in Kirinyaga Central and Kirinyaga West sub-counties respectively in peace awareness meetings, Kibicho said he could not afford to see people shedding blood during such organized events.

He said county leaders agreed to pull in the same direction and speak with one voice before, during and after the upcoming celebrations.

Kibicho warned the "foreigners" to stay in their respective counties and let the residents go about their business without undue outside influence.

"A 'general' Andrew Ngirici and I were imaginary enemies after some people continued to peddle lies that I planned to have him arrested until we met and found out that it was a simple lie, "Kibicho revealed at both meetings.

Kibicho, who also marched Ngirici at the two meetings where they publicly shook hands to demonstrate their new unity, said all residents of the region have equal rights regardless of their social position.

"Whether we are working in Nairobi or wherever the fact remains that we are all from this wonderful county, no one is superior to the other because we share the same status as human beings," Kibicho said.

With a show of hands, the residents of the two meetings vowed to observe and maintain the highest degree of discipline during the holiday by showing love and compassion to the Head of State and his guests.

The jovial locals further agreed to watch the party unfold on their home TVs due to the minimum number of stadium attendance in accordance with Covid-19 protocols.

Kibicho reiterated that only 3,000 people will be allowed to enter the stadium on the day of the party by invitation only, of which 2,000 will be locals and the rest from other counties.

“Despite this ultra-modern stadium with a capacity of 10,000 seats, we have limited it to only 3,000 people due to strict compliance with Covid -19 public health protocols. We cannot afford to have a situation similar to that in Kisumu, where many residents contracted the virus and died after ignoring the public health directive, ”Kibicho warned.

Accompanied by his counterpart from Infrastructure, Professor Mwangi Maringa and several MCAs and deputies, Kibicho said the head of state deserved his respect at the site and his entire stay in the region.

Maringa said that in 1969 the area had only 53 kilometers of tar, "but by the end of this year the county will boast over 600 kilometers of paved roads."

Maringa further listed other development projects the government is undertaking in the billions of shillings, including the Thiba mega dam, the 1.6 billion Kirinyaga water and sanitation project. shillings, the 15 billion shillings KEMRI research and referral hospital for the entire Mount Kenya region. and the two-lane Kenol-Marua road.

Local representative Wangui Ngirici was also present at both meetings, who urged young people not to be used by foreigners to wreak havoc against their own people.

She thanked locals for their overwhelming support when they elected her to the current seat and hoped the same would prevail as she seeks to run for governor of the region next year.