Elgeiyo Marakwet Senator Kipchumba Murkomen has wondered why Azimio presidential candidate Martha Karua has decided to fire Missiles towards Dp William Ruto, for the mass movement of various politicians into the Kenya Kwanza government, who are leaving thru faction and even others being independent.

Murkomen now says that according to their own records of the recent leaders who have joined the Kenya Kwanza Coalition, no Governor, Senator, Mp or even MCA who belongs to the NARC Kenya, headed by Karua has decided to defect to Ruto's UDA Party which keeps accepting more politicians into its side. 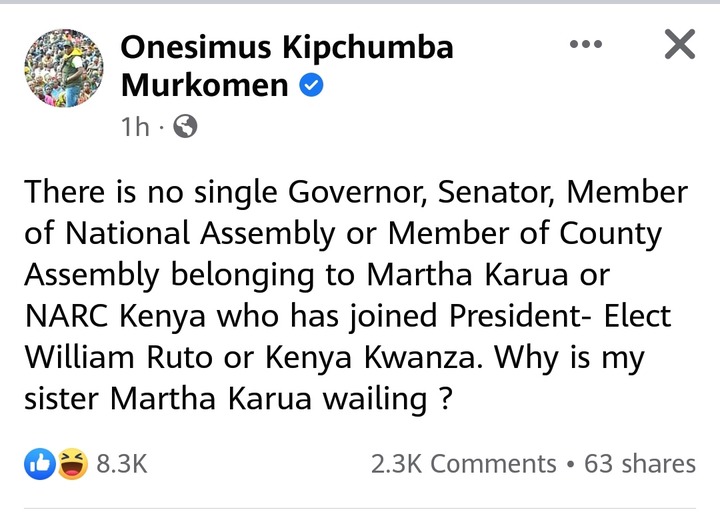 He however went ahead to warn Karua against lamenting each and every time a leader cross camps, since they have their own rights and freedom to do the same, especially if they don't ruin the Party's name or even go against the rules of the registrar of political parties, which binds someone into one faction or party, if they were elected through their ticket.

Karua who was Lamenting today was very furious because of the fact, saying that the young leaders who have been elected are allegedly being dipped into political conman ship and they should be careful on How they operate, now that Ruto has not been sworn in to take over government.

Other leaders who also gave their comments on the same includes Member of County assembly Robert Alai, who claimed that the Dp might not keep His side of the promise to the people, who have sacrificed thru own political career and sanity just to join Him and His allies in Kenya Kwanza, which might be their downfall and start of their journey to political cold.

Also, many Kenyans accross all social media platforms were of the same opinion urging that the post election agreements might not be very beneficial, while others praised Ruto, saying that most lenders are coming to His administration since they won and they want to be in government.

RIP: Hellen Wendy's Body To Arrive In Kenya On This Date