Two days after President William Ruto addressed the Senate and the National Assembly in a joint sitting, and proposed the alignment of the Constituency Development Fund, CDF for the MPs with the Constitution, as well as the establishment of the Senate Oversight Fund in favour of the senators, Matungulu Member of Parliament Stephen Mule has make a bold step in the realization of the same.

Speaking on Thursday in parliament, Ruto stated that CDF has been helping Kenyans at the constituency levels, and it is only fair for them to have the fund aligned with the constitution after Chief Justice Martha Koome said that the fund was illegal.

The president also stated that the Senators deserve the oversight fund in bid to keep track of the millions of money sent to counties for development.

According to a report by Nation on Saturday, Mr Mule has written to the Speaker of the National Assembly to formulate a legislation that will establish the CDF, Senate Oversight Fund, Youth Enterprise Fund, Uwezo fund in line with the constitution. 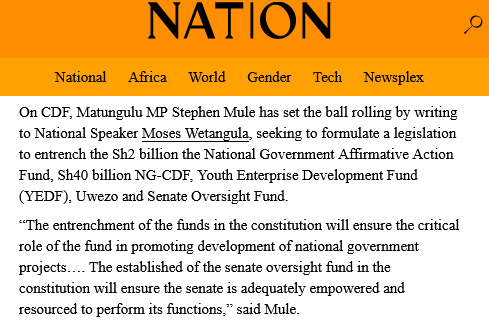 "The entrenchment of the funds in the constitution will ensure that the critical role of the fund in promoting development of national government projects is achieved."

"The established of the senate oversight fund in the constitution will also ensure the senate is adequately empowered and resourced to perform its functions," the Wiper MP said.

It is also reported that a Senator from Nyanza Region is also in the process of drafting a bill in support of the Senate Oversight Fund.