Voter registration has gotten off to a shaky start in President Uhuru Kenyatta's heartland of Central Kenya. 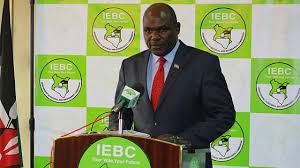 There have been many fewer new voters registered in the last seven days than the predicted 1.5 million, according to the most recent IEBC data.

In anticipation of the general election in 2022, the 30-day push aims to register roughly six million new voters.

In the meeting of the IEBC Board, Chairman Wafula Chebukati requested assistance from the government and other interested parties in mobilizing eligible citizens to vote.

Mr. Chebukati attributed the sluggish development to voter apathy and instability in some areas of the country. "The commission shall continue to explore solutions to these identified challenges in collaboration with all stakeholders in the electoral process," he said.

He also blamed the low participation on the lack of national identification cards and the culture of last-minute rushing.

There is evidence that Kenyans did not take full advantage of the early registration period in 2017. As a result, the final days of the registration drive saw a mud rush and long lines. Reverse this trend by removing the label of 'last-minute rush,' said Mr. Chebukati.

Since the Independent Electoral and Boundaries Commission (IEBC) launched the statewide operation on October 4, only a fraction of the region's targeted voters had shown up for registration.

Kiambu, Nyeri, Murang'a, Embu, Kirinyaga, Laikipia, Mombasa, Nairobi, and Kitui are among the counties with the lowest voters registration turnout.

Even though the number of registered voters in Rift Valley and Northern Kenya is still considerably below the IEBC's forecasts, eight counties in those regions have the highest proportion. The highest figures have been recorded in Samburu, Elgeyo-Marakwet, West Pokot, Nandi, Baringo, Tana River, Narok, Wajir, Turkana, and Mandera.

Deputy President William Ruto has garnered widespread support in seven counties with the highest aggregate percentage score of 43% within the first week of registration.

In the months leading up to the August 2017 elections, nearly 19 million people have signed up to vote. By the end of the process, the IEBC expects to have registered almost 25 million new voters.

Tana River County has one of the highest percentages of goals met in a week out of all those surveyed. Mt Kenya and Luo Nyanza counties have historically had the highest voter registration rates, boosted by their regional kingpins.

Content created and supplied by: quincy123 (via Opera News )