Orange Democratic movement party leader Raila Odinga is a big man in kenyan Politics and thus has earned him the name of "Political enigma"which simply means the godfather of Kenyan politics.

It is not his first nor second time to run for Presidency in the country but has tried for four times without luck and this makes it the fifth.

In his first attempt to run for the country's top seat,the orange Democratic party leader Raila Odinga used the the National Development Party of Kenya party which is currently being led by bungoma county senator Moses Wetangula.

This was way back in 1997 when he ran against the late president Daniel toroitich Arap Moi and former president Mwai kibaki and emerged number three in the race. This was his very first time to go for the top seat in a bid to remove Daniel Moi from the seat.

He is currently the part leader of orange Democratic movement party which is also among the oldest and strongest party in Kenya at the moment. 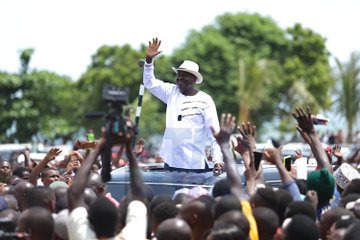