Why Atwoli Wants Kenya, Uganda, Tanzania Under One Constitution

By KDF.POLICE.SERVICE.UPDATES (self meida writer) | 1 months 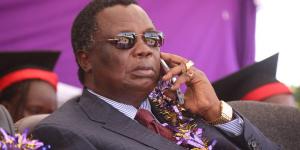 Speaking on July 26, Atwoli noted that the region needs to also have a political federation and allow its citizens to move out and freely work in these territories.

He opined that a city like Nairobi is crowded and citizens are fighting for resources which is also the case across other countries in East Africa. Atwoli noted that East Africans should be able to move and find other opportunities all over the region.

Similar calls were made by Deputy President William Ruto to Ugandan President Yoweri Museveni on July 7. The DP affirmed that Museveni had to ensure the realization of the East Africa Federation in the next two or three years.

He spoke during the official laying of the foundation stone for a vaccine manufacturing facility in Matuga, Uganda.

“You owe us. Before you retire and if possible in the next two or three years, you owe us the coming into fruition of the EA Federation.

"We are here as leaders and citizens of East Africa to support you and other leaders in the region to eliminate barriers that impede trade, investment, labour, and people working together,” Ruto stated.

The DP was the official guest during the event whereby both politicians revealed their commitment to enhancing locally manufactured vaccines within Africa.

"We are keen to building partnerships with other African countries to move the continent away from only packaging and labelling of drugs to the restructuring of its market to focus more on upstream production.

Museveni also affirmed that locally manufactured vaccines would be a great step for the African content to be put on the map in terms of innovation.

Both Ruto and Museveni have enjoyed a cordial relationship in the past. The DP joined the Ugandan leader during his campaigns in 2015.

Further, Museveni gifted Ruto with Ksh10 million during his birthday in 2019 to go towards the construction of the William Ruto Leadership Institute at Makerere University.

Types Of Men You Should Never Date

Countries That Have So Far Donated Covid-19 Vaccines To Kenya

Students to Go Back Home as from These Dates

How Some Businesses Have Benefited From Covid 19