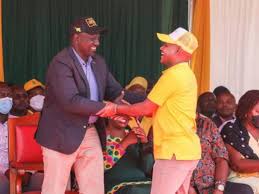 Thika Town MP Patrick Wainaina who was eyeing Kiambu Governors seat on a United Democratic Alliance ticket has ditched the party just months after joining the party, the legislature who ran for his first term in office independently was looking to clinch the Kiambu top seat using the party allied to the deputy president.

The legislature who is popularly known as Jungle has not declared his next political move but reports by People's Daily newspaper today claims that the legislature might be headed to the Party of National Unity headed by Laikipia Governor Ndiritu Muriithi who has already reached out to him.

Reports by People's Daily newspaper claim that the MP was forced to honour various pledges made by the Deputy President during his tour to Thika, “The MP was forced to dip into his pocket to pay millions the DP had pledged to women and youth groups as part of his empowerment program in Thika and Gatundu North where he hosted the DP,” People's Daily Newspaper published on January 18.

Ex-Britam MD Edwin Dande and Four Others to be Prosecuted Over Theft of 1.17 Billion