Nyeri deputy governor Caroline Karugu has revealed what her late mother told her on the race to succeed president Uhuru Kenyatta just before her death.

According to the ally of former prime minister Raila Odinga, her late mother asked her to tell Ruto to give Raila a chance to serve his term as he is still young and would still get his time to rule. 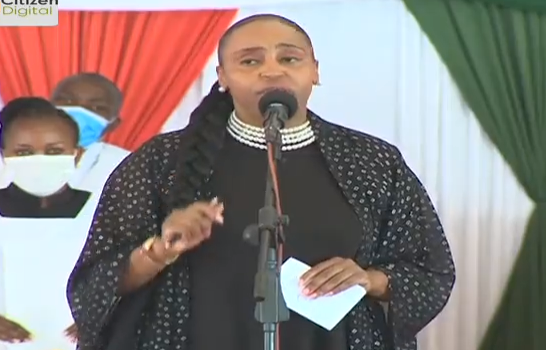 "My mother had a message for Deputy President William Ruto; It is not yet your turn, it's Baba’s turn" She revealed.

She said that her late mother hailed Raila as someone who has fought for the country and atleast needs to be given and opportunity to serve as the country's fifth president.

Same way Karugu claimed that her mother told her not to disturb governor Mutahi Kahiga as it was his time to serve, she assured her that her turn too would come. Karugu's mother is being laid to rest today, Orange Democratic Movement party boss Raila Odinga is present.