By Tuchi (self media writer) | 4 months ago 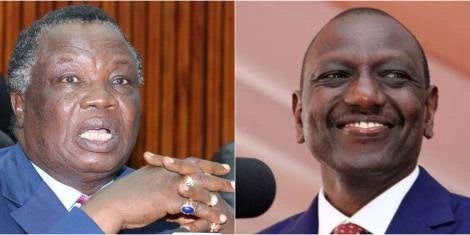 Francis Atwoli, secretary general of the Central Organization of Trade Unions (COTU), alleged that his estranged wife Roselinda Simiyu has always been an associate of Deputy President William Ruto.

According to a tweet from Atwoli, Roselinda struck an alliance with DP Ruto in 2007 following her unveiling as a UDA candidate at a rally in Bungoma County on Friday, January 28.

Atwoli declared in a scathing attack that he did not consider Roselinda to be a relative, despite the fact that the two sired offspring.

He continued by denouncing ANC leader Musalia Mudavadi and Ford Kenya counterpart Moses Wetangula as being among those who had abandoned him by allying with DP Ruto.

"Roselinda was handed over to William Ruto in his Eldoret residence in 2007. She is no longer listed as a related. Ruto can now add her for free to his two newly acquired bearded women (Mudavadi and Wetangula, bringing his total to three Western spouses. Azimio is located in western Kenya "As stated by the Cotu chief.