By Phode (self media writer) | 4 months ago 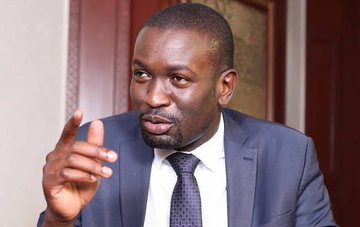 ODM Secretary General Edwin Sifuna is not new from controversy and doesn’t shy off when it pops up. Being a strong defender of ODM, he argued that ANC Leader Musalia Mudavadi cannot outshine Raila Odinga in Western region.

Kakamega Senator Cleophas Malala found it hard convincing the articulate Sifuna on how Mudavadi could have numbers that outweigh Raila’s supporters. The two were appearing on Citizen TV Breakfast Show hosted by Sam Gitukuon Tuesday morning.

Sifuna used the occasion to belittle Mudavadi and placing him below Kalonzo based on the NASA pecking order.

“Musalia Mudavadi isn’t going to be president in 2022. There’s no formula in OKA which places him above Kalonzo. Even the witchcraft from Amalemba will still proof to you that Kalonzo is stronger politically than Musalia,” Sifuna stated.

The ODM Secretary General further stated that: “The pecking order in NASA hasn’t changed; it was based on scientific data. Combining the votes of the 4 Luhyia principals in OKA, they don’t get to half the support Kalonzo has.”

Malala on his part argued that majority of governors were being threatened to support Raila Odinga, who is allegedly supported by the State, or they risk being dragged to courts of corruption charges.