By Therapist (self media writer) | 1 month ago

Incumbent governor for Kitui county Charity Ngilu has been angered by IEBC after she found her name among the aspirants for the county's gubernatorial race despite having withdrawn from the race long ago. Ngilu had arrived at the polling station to vote when she was welcomed by the surprise. 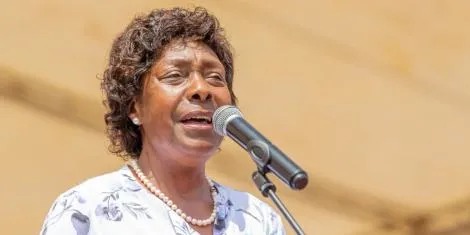 Addressing the press after she had cast her vote, Ngilu said that on July 19 she had written to IEBC asking them to withdraw her name as one of the aspirants. That did not however happen as her name stood at the polling stations. She said that that was a big mistake made by IEBC as it will lead to a big number of spoilt votes.

"I expected the IEBC to act fast after I notified them in writing. Such mistakes should not have occurred because it will lead to spoilt votes," she said.

Ngilu then asked her supporters not to vote for her but instead support David Musila who seeks to be elected as governor from the Jubilee party. She severely balmed the IEBC for causing confusion among her supporters as they had known she was out of the contest.

"The people of Kitui know my support is for the Jubilee Party candidate David Musila, and I have been campaigning for him, that fact hasn't changed" Ngilu told the people.

Ngilu's decision to quit the gubernatorial race was influenced by Raila Odinga who promised her a position in his government on June 15. That is when she decided to endorse David Musila for the same position. Follow the page for more news updates daily.

Content created and supplied by: Therapist (via Opera News )