Raila Odinga was born in the year 1945, in Maseno Kenya.He is a politician and a business man who served from 2008 to 2013 as a prime minister in kenya.Son of Jaramogi Oginga Odinga. 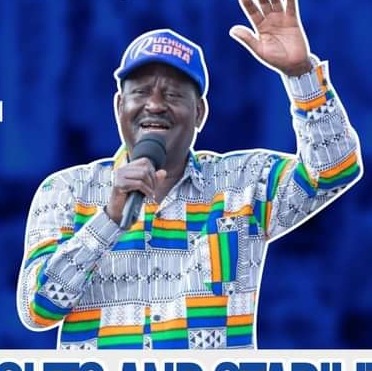 After earning a master degree in mechanic Engineering in East Germany in 1970 he came in Kenya and became a lecturer at the University of Nairobi in kenya.At the same time Raila and his father were members of Parliament at the same time between 1992 and 1994 in the National assembly.The only difference was Raila was an mp in langata while his father was Borno mp.

Raila Amolo Odinga learnt about his mother's death when 2 months had passed.In moi era he went to exile for one year in Norway after he started claiming that he was receiving threats that he would be assassinated after he protested a peaceful march that turned violent.

In March 2018 he grasped hands with president Uhuru Kenyatta which was a symbol of bipartisanship and later declared to vire for presidential seat in 2022 elections where he was endorsed by president Kenyatta and ODM.Keep safe share and follow for more updates.

Museveni's Son Muhoozi At it Again, Claims He's The Most Dangerous Man in Africa With German Roots