George Wajakoyah, a presidential candidate for the Roots party, has criticized IEBC Chairman Wafula Chebukati for reportedly not casting a ballot because of the Kiems Skit's failure. According to a news report supplied by a trustworthy source of information, the well-known presidential contender who attempted to cast his ballot in Kakamega was unable to do so since the voting kit failed to recognize him for unidentified reasons.

According to the information provided by Wajakoyah, he expressed regret that this had occurred and that he had already lost a significant number of votes as a result.

"I don't know what's going on because the engineer informed me that the KIEMS device didn't recognize me when I arrived to vote. I have already lost millions of votes from this region, which is really bad. As you can see, I was unable to cast my ballot, and many of my supporters were in a similar situation. For this reason, I would like to criticize IEBC Chairman Wafula Chebukati for his shortcomings, " George Wajakoyah, a candidate for president. 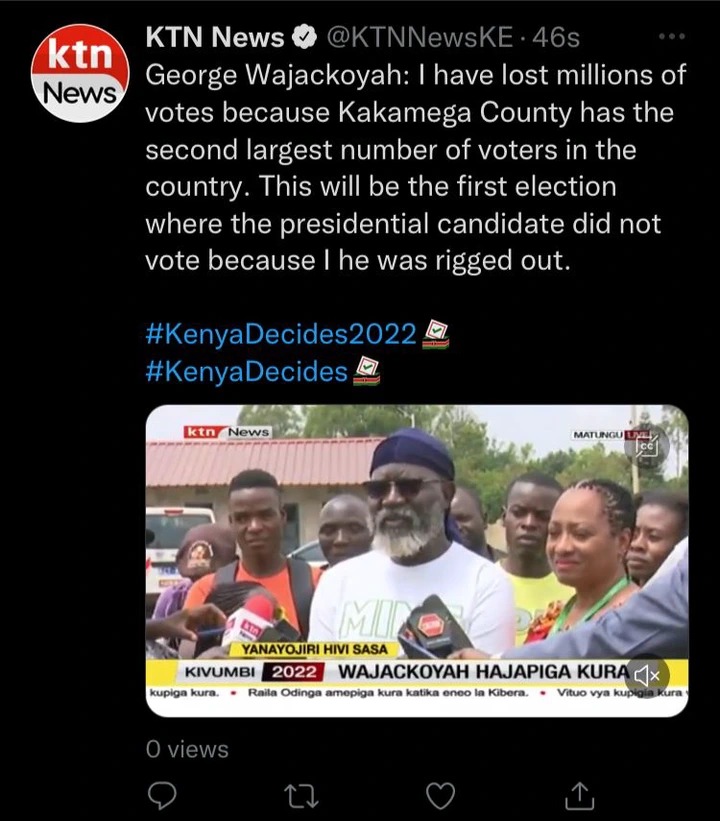 Kenyans who responded to his comments have requested that the inspector general of police and the director of criminal investigations investigate this occurrence in light of their opinions and suggestions.

My Sister And Her Pastor Used All The Money In My Account Without My Consent While In Gulf;Lady Says

6 Signs You’re Not As Mature As You Think

"I Have No Apologies To Make, We Must Move On" Raila's Longtime Ally Finally Pledges Loyalty To Ruto

"I Have No Apologies To Make" Donald Kipkorir Says After Vowing To Be Loyal To Ruto.

Lucky Man: A Man Emotional After His Rich Girlfriend Visits His Humble Home And Did This