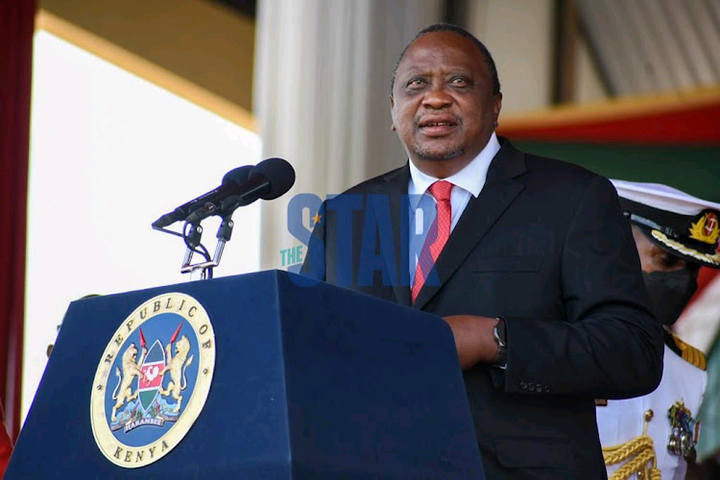 The statewide dusk-to-dawn curfew has been repealed, effective immediately, by President Uhuru Kenyatta.

Uhuru announced at the Wang'uru Stadium in Kirinyaga county on Wednesday during the 58th Mashujaa Day celebrations.

"I thus order that the statewide dusk to dawn curfew, which has been in effect since March 27, 2020, be and is hereby vacated with immediate effect," Uhuru said to thunderous cheers.

Uhuru made the announcement. Kenya had vaccinated five million adults as of Wednesday, adding that the rate of Covid-19 had fallen over the last two weeks, with a positive rate of less than 5%.

"I want to commend Kenyans for demonstrating an exceptional level of civic duty in this struggle and for truly being their brothers' keepers," the President stated.

Uhuru, however, warned that the country was not yet out of the woods and urged Kenyans to adhere to the Ministry of Health's containment measures.

The President also announced that the number of people who gather for in-person worship will be increased from one-third to two-thirds of all attendees if they follow all health protocols.

Restaurant owners were among those who had made a strong appeal to the President to relax the curfew.

The Entertainment Sector has been ignored, according to the Pubs, Entertainment, and Restaurants Association of Kenya (PERAK), while others gain from the eased Covid-19 control efforts.

According to Frank Mbogo, head of the PERAK Nairobi Chapter, participants in the industry believe it is time to eliminate the curfew and other limitations that have resulted in employment losses in the sector.

Over the previous three weeks, Covid-19 infection rates have been below 5%, and enhanced immunizations have given hope that the pandemic will be significantly slowed.

"Vaccinations have increased rapidly across the country, and there is a clear push to not only acquire more vaccines in the country, but also to deliver them to more people," said Michael Muthami, PERAK national chairman.

Many bar-restaurant owbarss, according to Muthami, continue to be harassed by police as they enforce the guidelines.

"The entertainment industry is the only one that is restricted, as all other industries are open." Muthami stated, "Matatus carrying at full capacity, supermarkets, and other markets are open, and churches are open and functioning properly."

The call from the operators came a day after Uhuru hinted that the curfew would be lifted soon.

According to PERAK, more than 15,000 taverns and eateries have closed since the pandemic began, displacing an estimated 90,000 people.

Excise revenue on beer, wines, and spirits fell by 19% in 2020, owing to the impact of alcohol sales limitations coupled with highwaters rates.

with high water request to the President is that he allows us to return to work so that we can continue to contribute to the country's economic prosperity." "We're not talking about extending hours; we're talking about reopening completely," said Simon Njoroge, chairman of the Bar, Hotel, and Liquor Traders Association.

Restaurants have previously been allowed to stay open until 9 p.m.