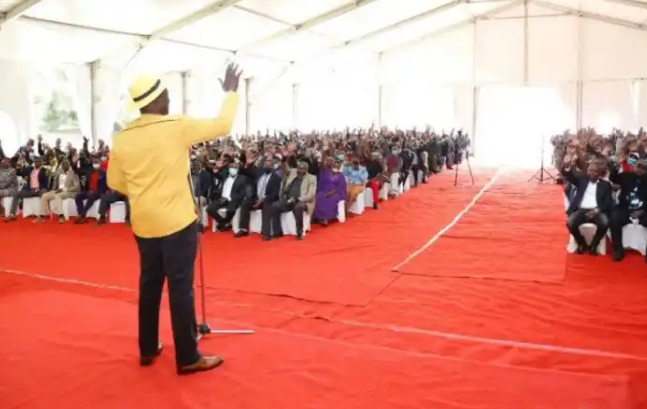 As the country edges closer and closer to the 2022 election, a war of might is emerging, with politicians trying to show the clergy the amount of power they wield in and out of the church.

In an interesting turn of events yesterday, Deputy President William Ruto, who has in the past been accused of defying his boss, was with a group of AIPCA leaders in their Gathaithi church in Githunguri who defied a directive given by their own boss and the church’s national leader, Archbishop Julius Njoroge.

Just days ago, Archbishop Julius Njoroge, the Head of AIPCA in Kenya, banned politicians from using their pulpit.

In what was deemed as a preemptive attack on Ruto days to his Sunday visit, the Archbishop admonished politicians who use to pulpit to claim they have God and the people. According to him, there’s only one God who sent his son to die for everyone, and anyone who claims to own God won’t be allowed in their Church.

However, in what appeared like a daring show led by the local leaders of the church’s Githunguri branch, not only did DP Ruto get a chance to address the church from the pulpit, but also contributed some donations.

While so far there hasn’t been any official communication from the church’s hierarchy concerning yesterday’s apparent mutiny from the Gathaithi church, it is expected that a clarification is likely to be demanded from the local Kiambu County clergy.

After the church service, Ruto went ahead to proclaim his generosity to the church through a statement released on his online accounts which read,

In everything I did, I showed you that by this kind of hard work we must help the weak, remembering the words the Lord Jesus himself said: ‘It is more blessed to give than to receive.’ ” — Acts 20:35