"Pesa Kidogo Umeanza Maringo, " Kenyans Angered By Simon Gikuru Over What He Asked Khalwalwe On TV

By Trendingmaster (self media writer) | 20 days ago 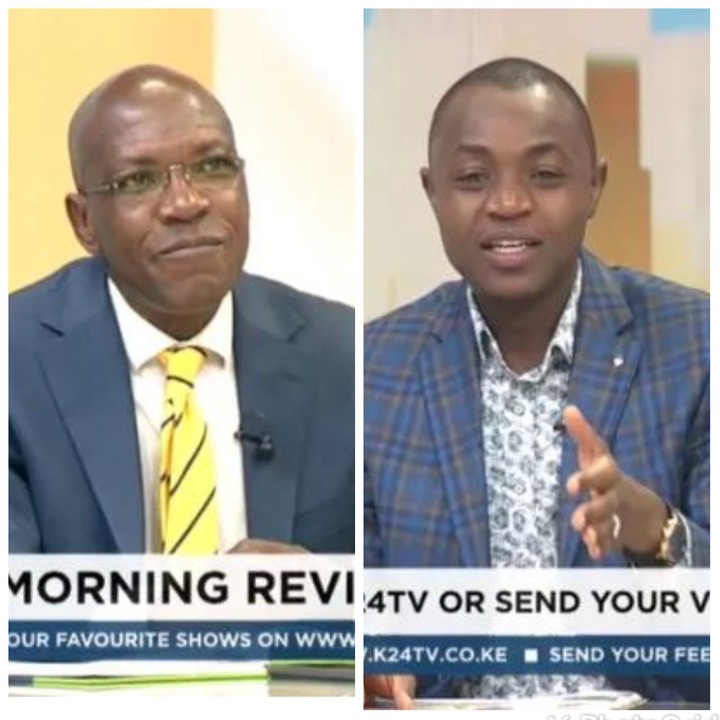 Kenyans on Facebook have been angered by the Amani National Congress party Secretary General Simon Gikuru over the question he asked Boni Khalwalwe on live TV Interview.

While speaking on K24 TV on Wednesday morning, Boni Khalwalwe said that there are many people in the business community who are hustlers, and they are given credit since they are hustlers who have succeed, hence one should not dismiss the power of a wheelbarrow. He added that fellow hustlers will support the person they believe will win the elections.

Immediately, Simon Gikuru asked Bonny Khalwalwe if he will gift his son or daughter a wheelbarrow.

"I would like to ask my big brother Khalwale, would you gift your son or daughter a wheelbarrow? "

"Young people in this country want real opportunities, they want a working economy. It's not just about Kazi ni Kazi, it is about Kazi with dignity"

Gikuru then urged young citizens in the country that its their votes that matters the life they will lead.

"I want to talk to the young people in this country, it has come a time where your vote is your life" 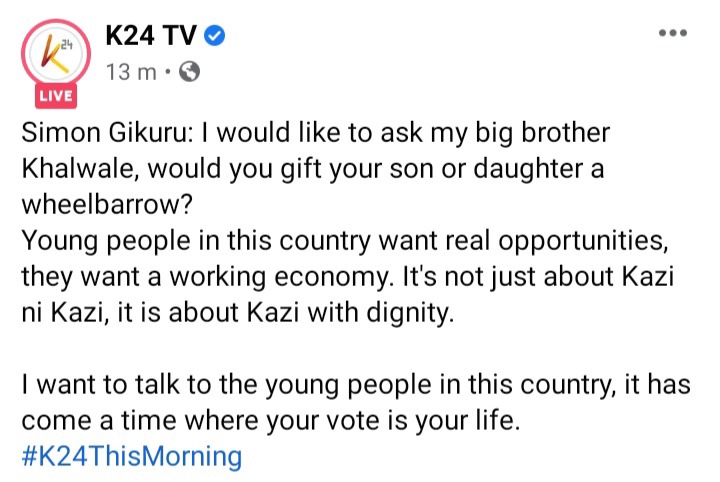 However, Kenyans on facebook were angered by his question where they told him he is irrelevant and braging because of the little money he has earned as the ANC Secretary General, claiming that a wheelbarrow has a lot of impact on a common Kenyan.

"Irrelevant question brother pesa kidogo umeanza maringo .do you know how much Is the wheelbarrow and what it can impact to a common Kenyan"

Here are other reactions,

Ronald: Hey guys, how did Gikuru got into this interview? This man is an empty-head who doesn't deserve to discuss matters politics. You mean he doesn't understand that a wheelbarrow is just but a party symbol like the orange. This is stupidity!

Reuben:The wheelbarrow is just a party symbol just like the 🍊🍊 symbol in ODM.These youths have been completely brainwashed to believe that there's a wheelbarrow donation

Nyakiti: Let Tanga tanga not throw our youths into a state of confusion and disillusionment, their kids are doing better jobs and driving in very expensive vehicles, nobody wants to be poor, and works to be poor giving our youths wheelbarrow and mkokoteni is an insult to them and the economy.

Uhuru Tells Off Ruto Over Handouts

Dear Ladies, Keep These 4 Things At Your Fingertips When You Date A Married Man.

God's 8 Promises to Those Who Love Him