By SirReagan (self media writer) | 4 months ago 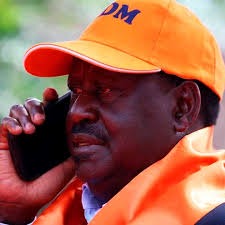 Two Kenyans have mounted a hurdle in the way of ODM party leader Raila Odinga ahead of the forthcoming General Elections. The two petitioners now seek to bar Raila from contesting in the August 9 presidential election.

The two, John Kenga and George Bush, files a petition barely one week after the nominated MP David ole Sankok said that he would take Raila to court over his mock swearing-in as the Kenya's peoples’ president in 2018.

George Bush and Kenga now wants the court to compel the DCI and the Director of Public Prosecution to press criminal charges against the ODM party leader.

According to Bush and Kenga, Raila should also be stopped from fielding candidates over his parallel swearing-in ceremony. They claim that the parallel swearing-in was a premeditated political event which should be punishable by life imprisonment or death. They also grieve that others who participated in the swearing-in were invesigated but Raila was left out.

They claim that Raila has a pending criminal case and thus should not be allowed to contest in the coming general elections. The petition has also enjoined the Registrar of Political Parties and Independent Electoral and Boundaries Commission.

5 Best Fashion Trends In 2022 For Ladies