By GraceMwendeM (self media writer) | 4 months ago 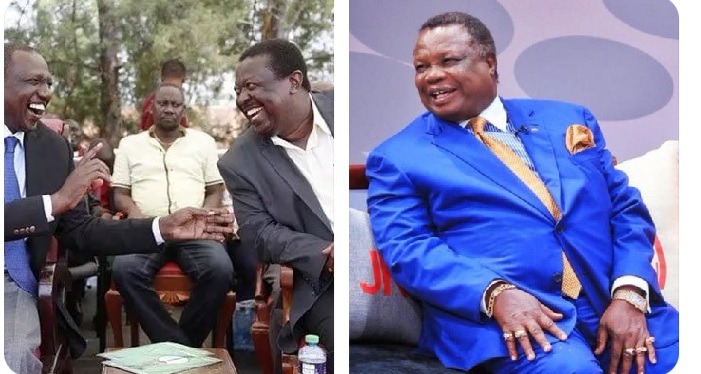 Amani National Congress (ANC ) party leader Musalia Mudavadi has announced that he will be making a major declaration on Sunday 23rd January 2021 that will shock Kenyans.

While Kenyans are curious to know about this major announcement, rumours are that Mudavadi has already been paid over 20 million shillings to deputise DP William Ruto in the 2022 general election.

This move might come as a major betrayal in the OKA coalition, Mudavadi has already been seen distancing himself from the teamby not attending their recent meetings.

Political analysts Professor Makau Mutua has however dismissed the idea of Mudavadi deputising Ruto as he is far much old and experienced than him.

Mutua called on COTU Boss Francis Atwoli who is among the leaders of Mulemba Nation to advice Mudavadi.

However Atwoli thinks its upto Mudavadi to decide on what he wants and the world will be watching.

"I say NO.In fact, the man from Sugoi has belittled Mudavadi by calling him names. He has referred to him as "Huyu mtu wa mandazi", "Yule mtu wa kumbekumbe", "Yule mtu wa Cerelac", among others.So the world is watching how Mudavadi will handle that," Tweeted Atwoli.

Gashagua at risk alongside other politicians with pending cases in court

Another Drama in Western as 3 MPs Are Cornered by a Colleague, Runs to The Party Leader for Help

Mudavadi Names The Agency Allegedly preparing to Rig Ruto Out, Offers A Solution

Ruto Did Not Complain When Matiangi Campaigned With Them In 2017,Why Condemn Him Now? Omogeni Asks

15 Quotes by Neson Mandela that Would Change Your Life