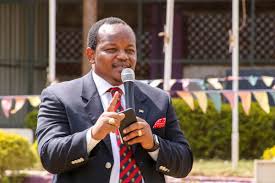 Ngunjiri Wambugu is on record revealing that jubilee party was not prepared in the Kiagu ward by-election. He has from the word go been against the party fielding a candidate in the by-election for the reason that he feels the party is not well prepared.

He has predated doom for jubilee party in the Kiagu by-election given the fact that such utterances from him just reveal of the soft underbelly of jubilee party. It emboldens UDA clearly confirming that the ruling party might badly lose in the by-election however much they try.

Though a strong supporter of jubilee and Uhuru Kenyatta, its a fact he has been making pronouncements which only confirm jubilee has serious infighting. It's clear the ruling party seems to have collapsed a might death having lost by-election even in Kiambaa which is clearly Uhuru Kenyatta's bedroom.

However as always it's a matter of wait and see of who will win in the by-election which is happening in October 14th. Remember politics is always local and the fact that most elected MP's in Meru support UDA, that just confirms of why Jubilee would lose in the by-election terribly to UDA which seems the choice party choice of Mt Kenya region as recently confirmed by most leaders from Mt Kenya region.