Sunday Nation: Merger talks indicate that Ruto's objective is to have one party. 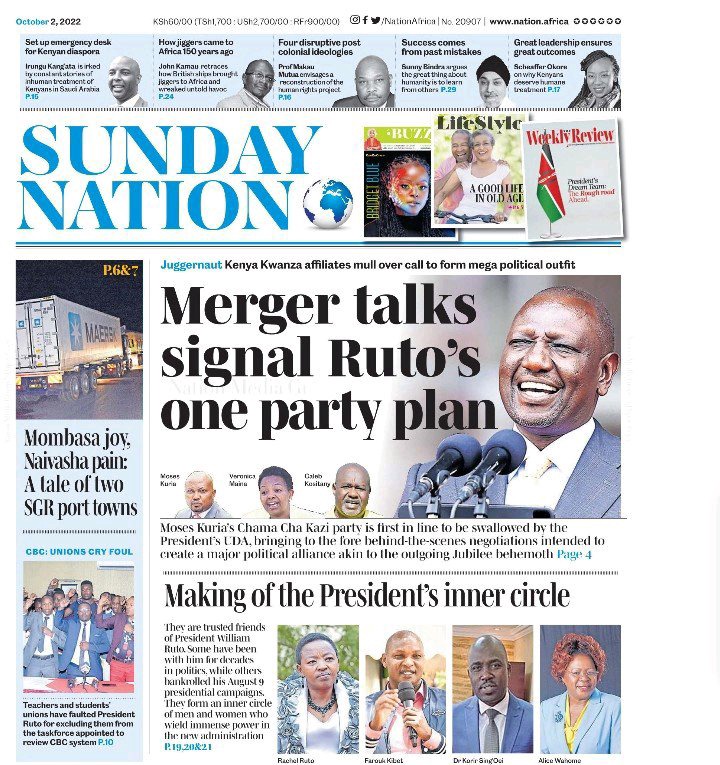 Over the course of his first two weeks in office, President William Ruto is leaving nothing to chance as he strives to establish himself in the years leading up to the 2027 election.

In an effort to replicate the success of the Jubilee alliance, which successfully united a number of political factions in the run-up to the general election in 2017, the current head of state is currently participating in discussions aiming at the formation of a single large party. 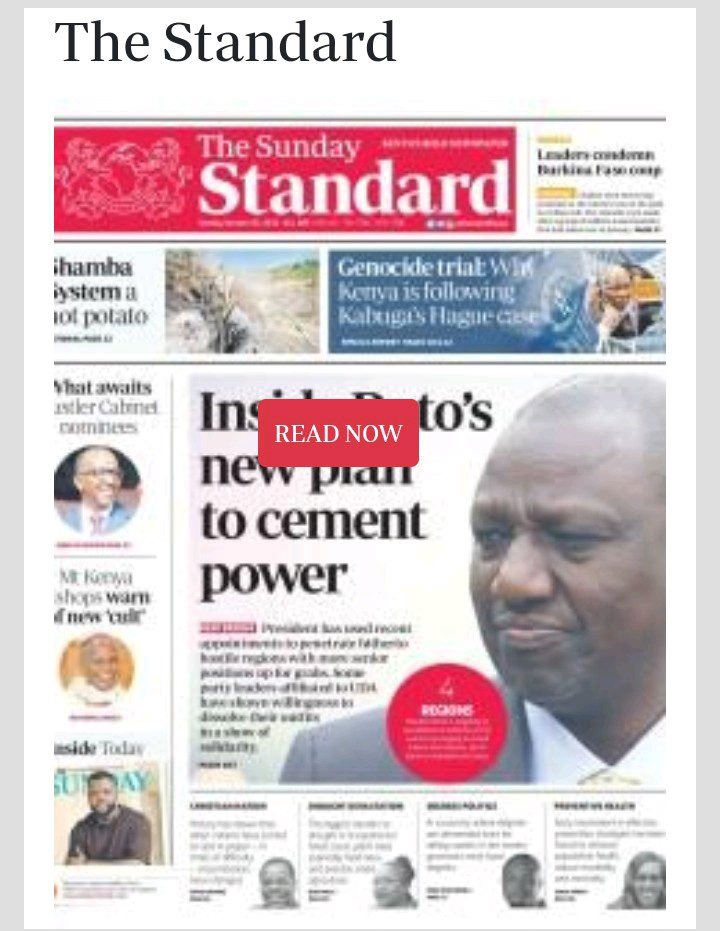 Moses Kuria's chama cha kazi is reportedly the first one to be absorbed by the president's unified democratic alliance, according to the reports.

Moses Kuria has been nominated to serve as the Cabinet Secretary for Trade; thus, he is expected to resign from his position as the party leader.

It is important to note that the president's goal has been for there to be just one major party with a national agenda from the beginning, and he has always wanted the other parties to dissolve. 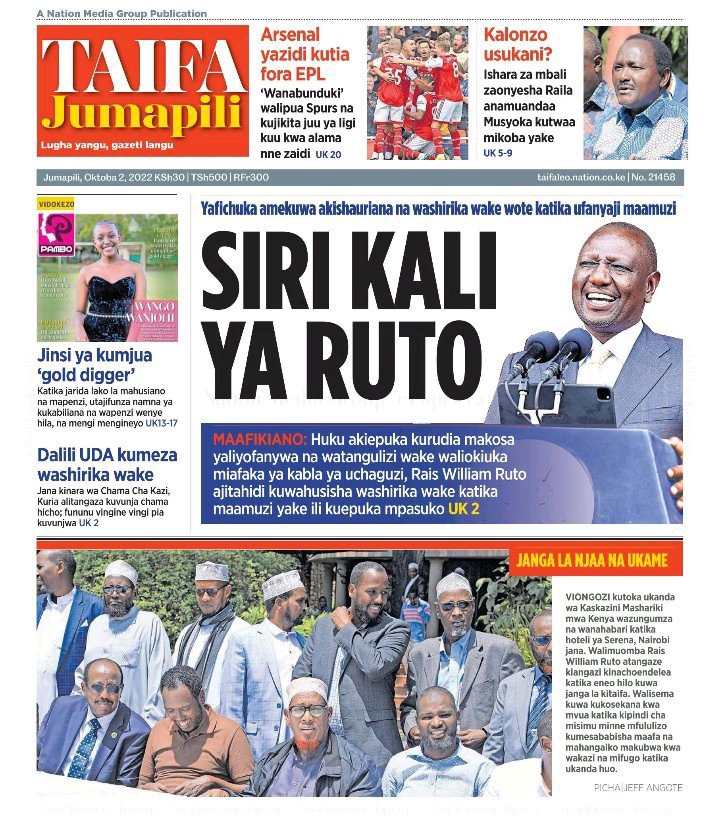 After achieving his goal of becoming president, it would appear that the commander in chief is well on his way to accomplishing his goal.

Naivasha was reduced to tears as the coast came back to life after President Ruto took office on September 13. He made the announcement that services would be restored to Mombasa immediately after taking office. 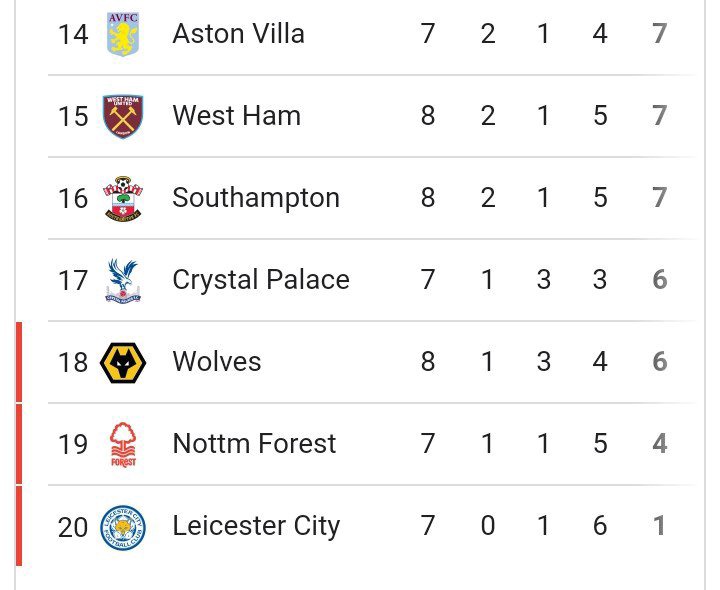 And finally, both educators and students have voiced their displeasure with the choice made by the president to leave them off the task group that was established to examine the competency-based curriculum.

Earlier on, teacher unions made a request to the government, requesting that they be included in the CBC review so that their opinions can be taken into consideration.

Inside Ruto's brand-new power consolidation strategy, as seen in The Sunday Standard.

William Samoei Ruto, the current President of the Republic of Kenya, has taken great effort to ensure that he does not repeat the errors that were committed by his immediate predecessors, Uhuru Kenyatta and mwai kibaki, by consulting with his closest allies before making significant policy decisions.

This action is being taken with the intention of preventing an implosion inside the coalition, similar to what occurred within the Jubilee Alliance and the Rainbow Coalition.

In a separate piece of news, the famine that has gripped the counties in the region's north and northeast is dangerously close to spinning out of control, even as local leaders demand that the government recognize the crisis as a national emergency.

The officials of the region have stated that the proclamation will make it possible for anybody who wish to help the families who are suffering from the hunger to contribute food to them.

And last, in the world of sports, the English Premier League powerhouses Arsenal kept their advantage at the top of the table by dominating their London rivals Tottenham at the Emirates stadium. 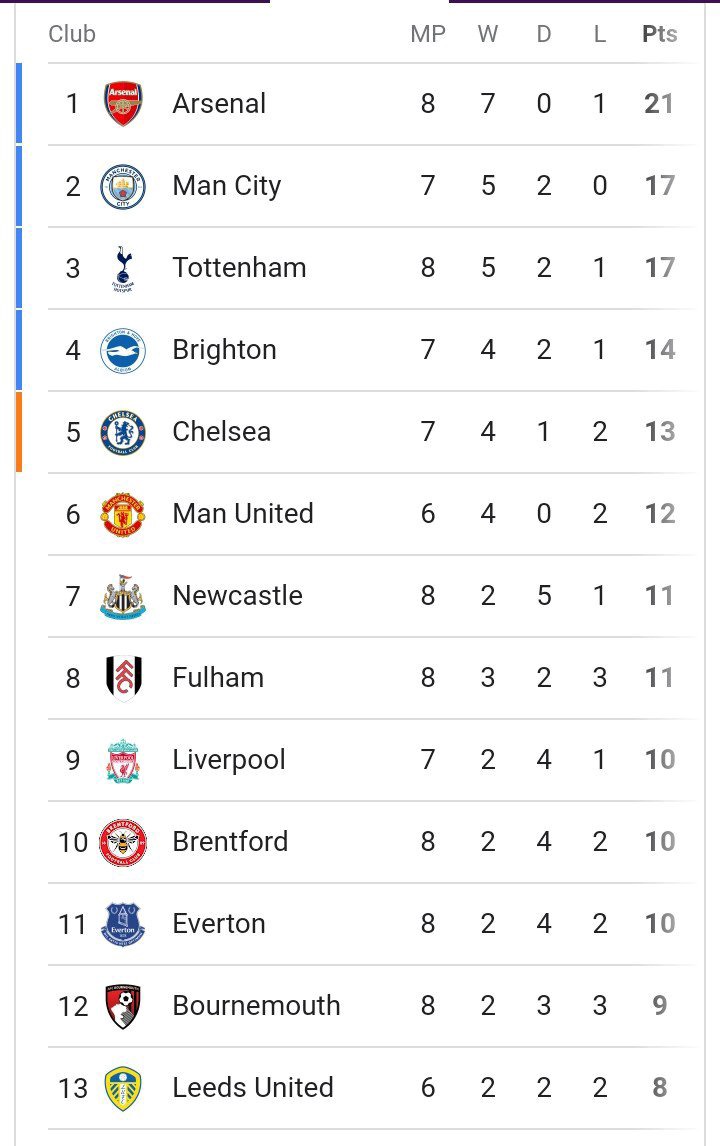 Arsenal scored three goals and defeated Tottenham in a thrilling contest, with Harry Kane netting a goal for Tottenham in the losing effort. Following yesterday's matches, the table standings are presented below.