By Explanation (self media writer) | 1 year ago

Uhuru's coalition of chaos: The President's new army of BBI preachers is a distrusting, ill-tempered and scheming lot. As the clock ticks towards a referendum, can he bring sanity and order to a chaotic house?

I will not head 'No' campaign, says Dr William Ruto: Deputy President, who previously said the BBI process is a waste of time and money, gives up the fight.

Two women, two murders, two probes: Police in Nairobi are investigating two murders that have gripped the nation in recent days. In the first incident, detectives are trying to establish whether a trainee priest killed his lover, Charity Cherop Cheboi, and her child; while in the second, a multimillion shilling tender war is at the heart of investigations into Caroline Wanjiku Maina's death.

Raila goes it alone: ODM leader opts to shake off the Nasa baggage in his countrywide BBI crusades, just a day after a colourful photo-op in State House that got the political tongues wagging. 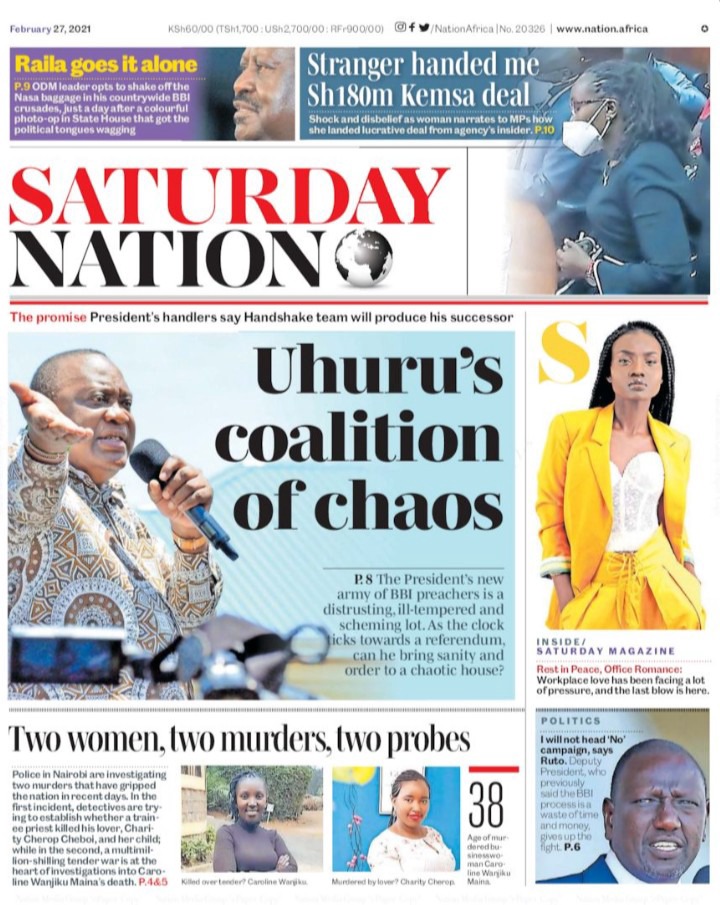 Raila: Why my presidential run decision will wait 2022 elections battle. ODM leader Raila Odinga defies pressure to make public his plan on whether or not he will run in next year's presidential poll, saying he will only do so after the BBI process.

When loved ones go berserk: Murder puzzle - A wave of killings is sweeping through the country as former lovers now turn to suspects, leaving a trail of pain and desperation for those left behind.

Taxman to MCAs: We want a share of car grant - KRA has deflated the spirits of county assembly members after confirming that the car grants given to them by the State will attract 30 per cent tax.

Pyramid schemes: The pain and elusive justice - After years of waiting the court dashed the hopes of victims of multi-billion shilling con schemes. Today, the Standard reveal how gullible investors were lured with promises of quick, tidy returns only to end in premium tears. 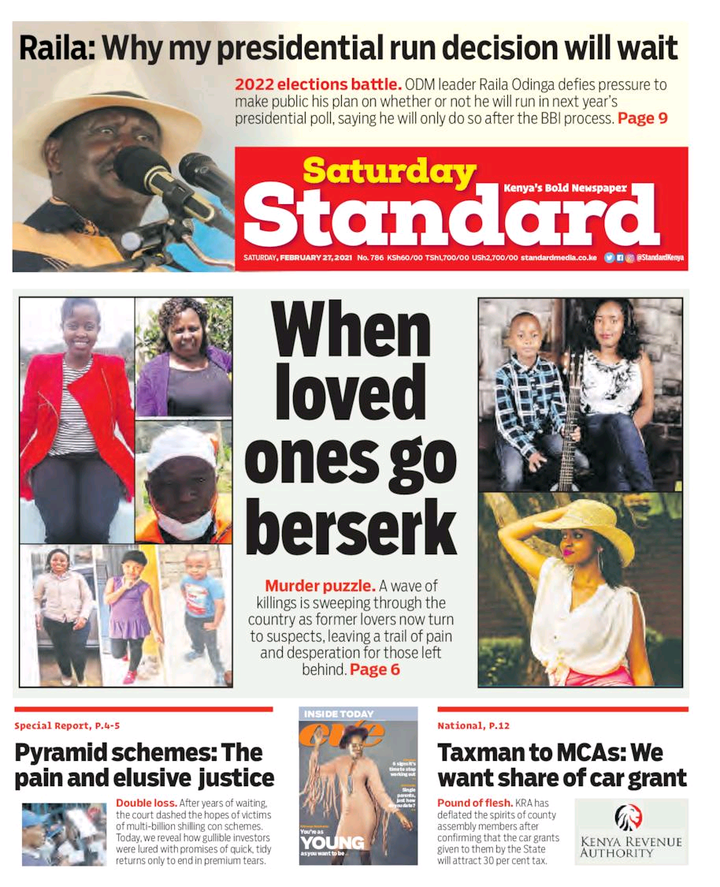 Covid-19 vaccines expected next week in the country: Kenya will receive the first batch of coronavirus vaccines next week, with healthcare workers, security personnel, teachers, hotel workers and the elderly on the inoculation priority list. Adispatch from State House yesterday said the first batch of the vaccines would arrive in the first week of March as Kenya races to vaccinate 1.25 million in phase one of the campaign by June.

Millionaire investors in Safaricom cross 10,000: Safaricom's share price rally has created an additional 1,500 millionaire investors in just over five years. The telecoms operator now has at least 10,000 investors holding shares worth more than Sh1 million each, up from an estimated 8,500 in 2015, analysts and regulatory filings show. The rising number of high net worth investors in the Nairobi Securities Exchange-listed firm has been helped by the rally in its share price over the years. Safaricom's stock, which has appreciated to the current all time high of Sh39. 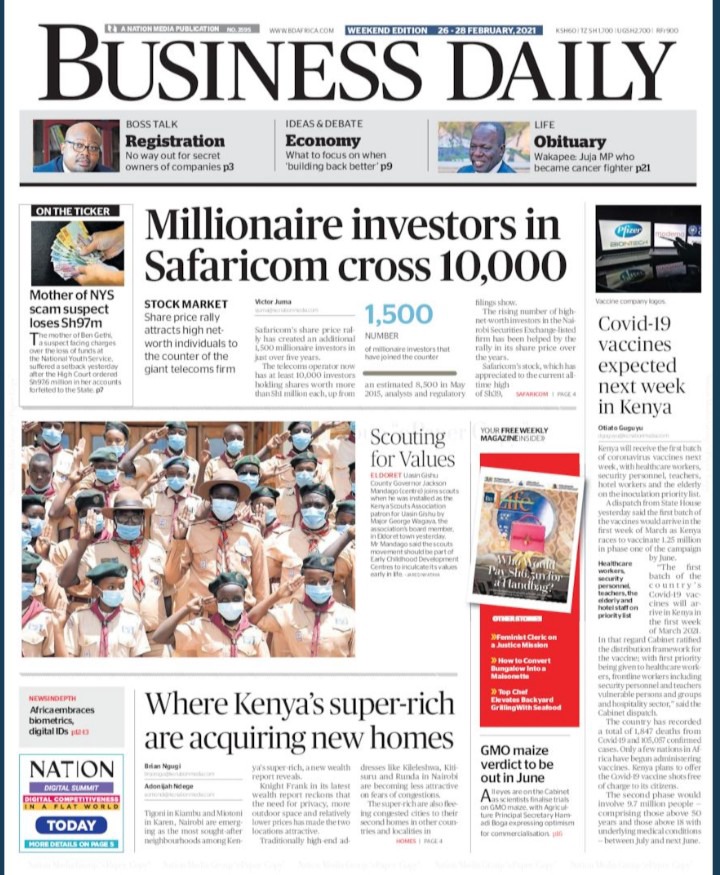 Deputy President Waliam Ruto may be ousted from his official residence in Karen Nairobi, recently, said Jubilee Party (JP) Deputy Chairman David Murathe. Some people are also claiming that there is a plan to appoint a minister to act as the deputy president. David Murathe said the plans are nearing completion, and would come as a surprise to many. "Although that is the official residence of Deputy President Dr. Ruto he has been using it to hold illegal meetings." 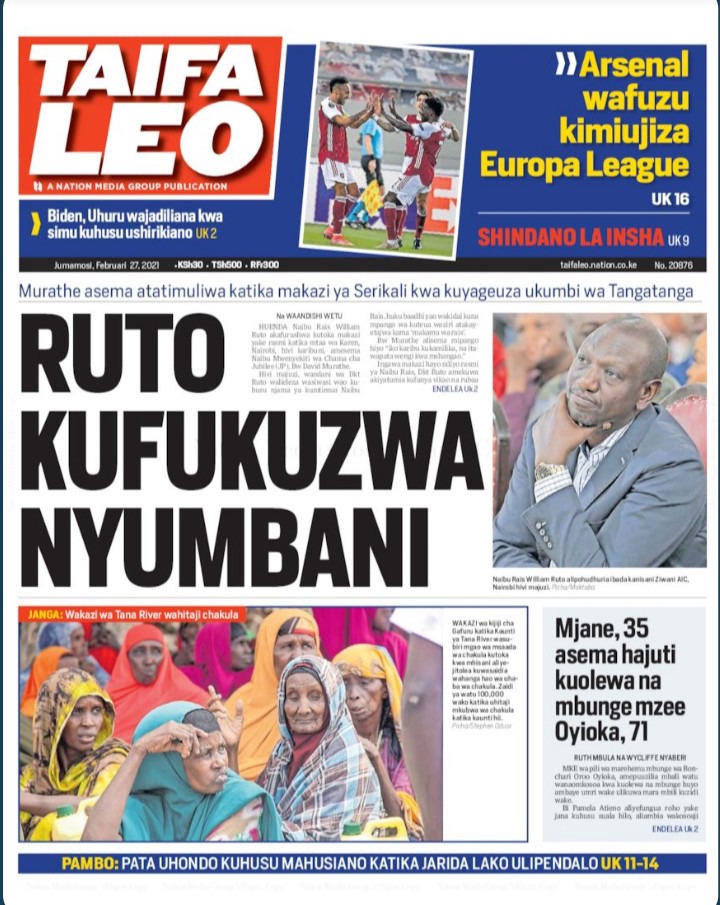 Are You Suffering From Miscarriages, Chronic Ulcer And Sexually Transmitted Diseases? Check This Out