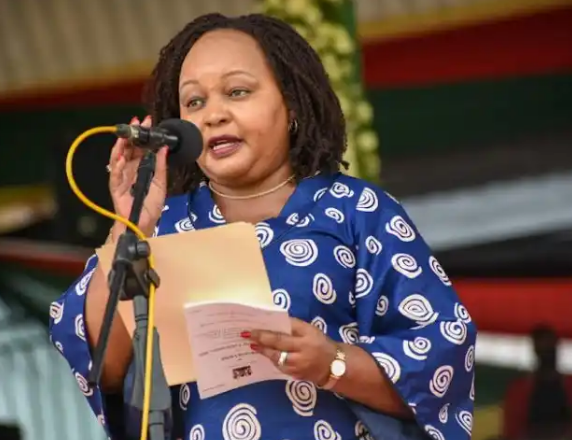 A man going by the names Stephen Kariuki Muigai has now come out to claim that despite an agreement between him and the Kirinyaga governor Anne Waiguru, the governor eventually failed to come through on her promise, hence leaving him stranded alone in an expensive Kirinyaga hotel.

Waiguru, who famously got married to lawyer Kamotho Waiganjo in an elaborate 2019 traditional wedding which was attended by even the president among other dignitaries, is yet to comment on the issue.

An indignant Stephen Kariuki Muigai, who embarked on a one week walk from Nakuru to Kirinyaga to attend this year’s Mashujaa Day celebrations claimed to have been left stranded at the Kerugoya hotel despite having been given personal promises and an assurance.

Muigai, 67, walked at least 230 kilometres to attend the Mashujaa fete held at the Wang’uru Stadium in Mwea Town, Kirinyaga County.

He arrived in Kirinyaga at 7 pm on Tuesday, October 19. He said that he was welcomed by the governor’s office through a group of people introduced themselves as officers working for area Governor Anne Waiguru. They received him and took him to Waiguru’s residence in Kagio Town near Sagana.

Mr. Kariuki narrated how another 50 member group of visitors, said to be Mau Mau heroes, joined him at the governor’s residence.

Kariuki said Waiguru received him “warmly” when leaving, was gifted pishori rice, coffee and tea packs, and loaves of bread.

Waiguru reportedly left the visitors in the hands of her aides.

“One of her assistants booked me into a hotel in Kerugoya Town, promising to pick me up at 7am so that he could take me to Wang’uru Stadium,” Muigai said.

Wednesday morning, no representative from the governor’s office came for him, leaving him stranded, he said.

“It hurts when one walks more than 200 kilometres, only to miss out on the event he or she had eagerly anticipated,” said Muigai.

Last year, during the Mashujaa celebrations held at the Gusii Stadium in Kisii County, Muigai was locked out of the venue over lack of an invitation card.