Former Senator Bony Khalwale has started a War against ODM Boss Raila Odinga for allegedly faking His popularity by compromising the opinion poll companies, saying that He will make sure that He drafts a Bill and submit it to Parliament to destroy such companies for allegedly misleading Kenyans.

Khalwale says that Raila used His alleged bad tactics to try and shift the attention of Kenyans from William Ruto to His side, by bribing some of the opinion poling companies that brought Him to the top while suppressing Ruto. He added that the same was done in 2007 when He was competing with Mwai Kibaki and Kenyans killed each other while thinking that their Candidate had been rigged out. Khalwale promised to sponsor and even draft a Bill that will bring laws to do away with such companies, and put strict laws to those remaining.

"Raila has realized that He is slowly losing the grassroot support and now decided to manipulate some Polling stations to give Fake results, and kill Ruto's support. That is evil since the same system was used in 2007 when He was on the ballot with Kibaki and supporters from both sides killed each other, while demonstrating that their Candidate had been rigged. I intend to stop that if elected to senate since I will bring laws to make it hard for those companies to do so. They must be scrapped out. "Khalwale says. 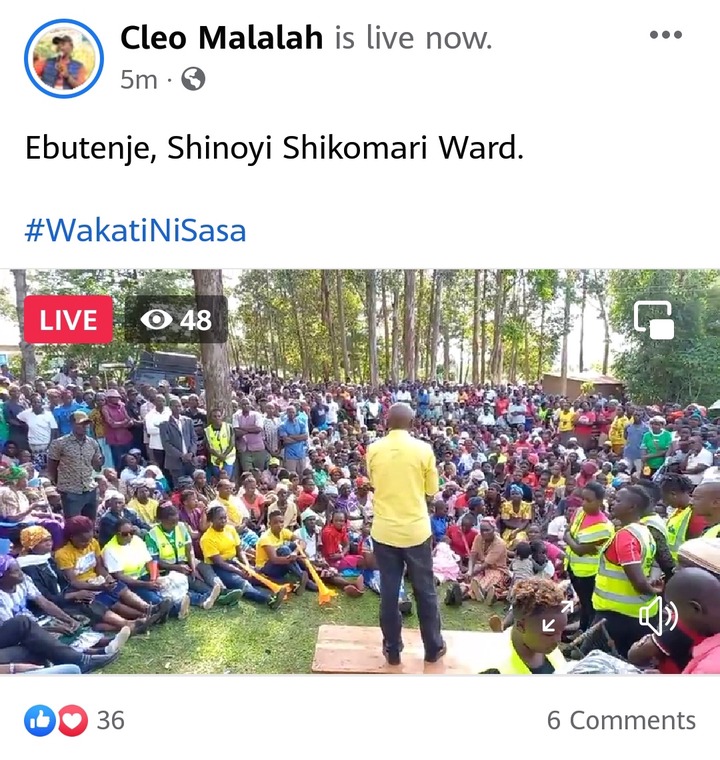 He also claimed that He pressed President Uhuru Kenyatta during His first term to build level four Hospitals for Kenyans in all counties, adding that He saw regional imbalance in matters of development since most projects were taken to Mt Kenya region. He also asked the head of State to stop bragging of the Jubilee success, adding that most of them were done in bad way and even overpriced and extra money stolen hence bringing the extra Burden to Kenyans.

"I remember giving Uhuru a hard time when I was a Senator from 2013 to 2017, because I stood and ordered Him to build Big Hospitals in all Counties so that Kenyans can get good health, because I saw that the allocation of projects was done in an inappropriate manner and taken to Mt Kenya region. Since He is finishing His terms, He should not brag of development since much of the money used was overpriced and stolen. "He added.

Khalwale spoke in Ebutenje, Shikomari ward today while in company of others UDA politicians.

Lady Approaches Male Worker Inside the Bank, Confesses her Feelings for him Before Demanding This

Update On The EPL Table