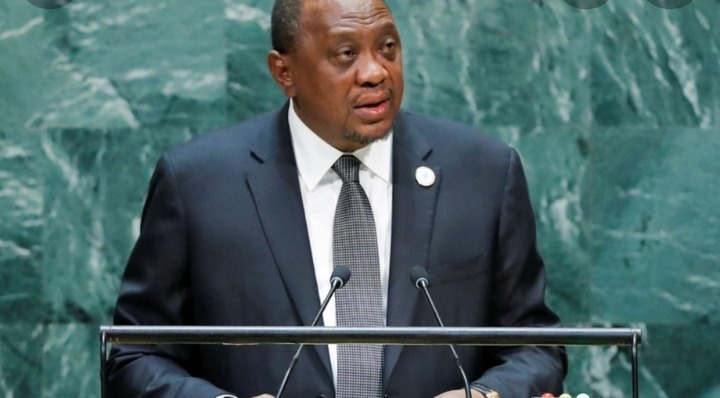 Former President of the law society of Kenya Nelson Havi has claimed that He went through a very rough time in 2017 while He was fighting President Uhuru Kenyatta legally and even in the legislature part of the government systems to block His appointments which He felt would bring problems to the Country.

In a message through Twitter, Havi claims that He saw through His own experience and perspective that Uhuru's move to appoint a selection panel, that would in turn select the four IEBC commissioners who are in question right now, was a very terrible idea to the Country and therfore He decided to take both the legal route and also influencing some members of parliament who were of the same opinion with Him, to reject it completely. 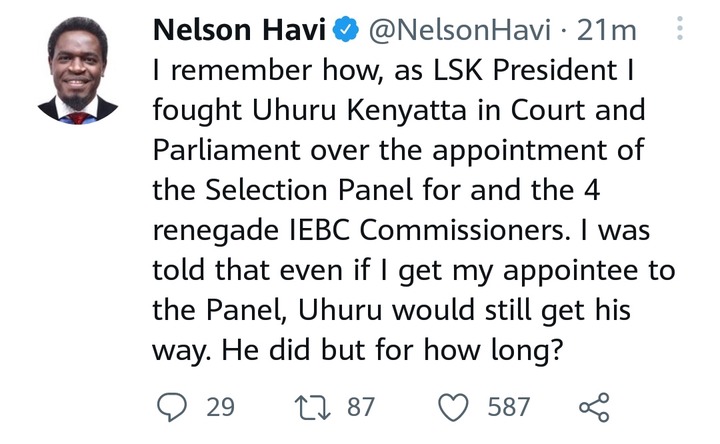 The lawyer however went ahead to reveal that someone powerful later threatened Him to keep out of the matter since Uhuru was very determined and even if He tried to front His own member in the panel, He will lose the war because Uhuru would still take charge and use His own office and influence to get through with His plans, which were facing alot of troubles and rejections.

In what appeared to be Some kind of attacks to the head of State, Havi said that the scheme never benefited Uhuru and His allies in any manner since they were defeated in the just concluded elections, that promoted His deputy to the top seat, after a landslide win.

The Westlands Mp however warned Dp William Ruto together with His government not to accept any appointments that are being done by Uhuru while in Office, urging that it's a scheme that is being crafted slowly and would being alot of shame and other damages to the incoming administration.

Hon. Nelson has been on a constant mission to destroy Uhuru's plans and even exposing alleged paths and state officials that are being used to execute different mandates, against Ruto, while sending warnings to Uhuru and confirming His legal support for the Dp and other people around Him.

Uhuru made several appointments two month ago and even keeps doing the same despite the fact that He is retiring, something that has raised eyebrows, and called for more intelligence digging and Investigations.

Revealed: Why President Ruto made an Impromptu Visit to Parliament Today

Raila Ally Speaks On Majority-Minority Stalemate, Reveals What Will Happen If KKA Are Given Majority

"Why Is He In Parliament Right Now?" Ledama Reacts To Ruto's Impromptu Visit To Parliament Today