Kenyan Politicians Who Disrespectfully Walked Out of Interviews Live on TV

By Jackiekibet (self media writer) | 10 months ago 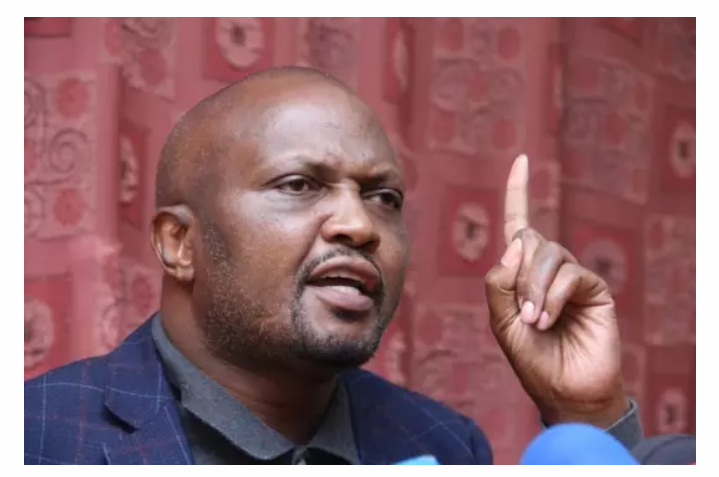 TV Live interviews are interesting bits that no one likes to miss. Former Citizen TV news presenter Hussein Mohammed has always been receiving praises for being the best journalist in conducting interviews with politicians.

He perfectly would pull out a strategic interview and he knew how to pin the politicians to answer all the questions just as Kenyans wanted. A few months ago, Ken Mijungu interviewed Deputy President William Ruto and Kenyans could not contain themselves from recalling how Hussein would have pulled out the best.

Midway into the discussion Hussein's name started trending on Twitter, with people reminiscing how he would engage the DP in past interviews. Many compared Mijungu to the former Citizen TV anchor, who was known for cornering his subjects.

Though most of them are cooperative, there are some politicians who never cooperate during live interviews that they even walk out before the session is over. Here are some of them.

Shollei and 7 others had been charged in a KSh 150 million corruption case. She was accused of procurement irregularities which included the buying of the residence of the chief justice to the tune of KSh 310 million. She was also linked to the contentious authorization of KSh 46.4 million to build the pre-fabricated Mavoko law courts.

When asked about her integrity by Jane Ngoiri, Shollei walked out of the studio after saying she wasn't going to answer about something that happened four years ago.

Shollei had just won the Jubilee nomination ticket for the Uasin Gishu Woman rep seat. She was up against Margaret Kamar, Kurgat Janet, Lelei Rael and Peris Simam.

She emerged the winner with 22, 133 votes according to provisional results. Her entry into politics, came after she was fired by then Chief Justice Willy Mutunga on grounds of misuse of power and misappropriation of funds.

Kuria had been asked to shed light on the incitement allegations leveled against him based on a clip showing him allegedly inciting his constituents.

In the clip, he was captured urging the people to slash anyone opposed to the NYS projects. Those utterances angered the Kenyan public and prompted condemnation from National Cohesion and Integration Committee.

During the interview, Kuria insisted that the media was showing selectively edited footage. He challenged the media house to show the full footage claiming that the clip doing rounds was prejudiced.

“I have got a case in court and this edited footage is going to prejudice the case,” Kuria said.

When Hussein insisted on playing the clip, the flustered MP walked out of the interview. 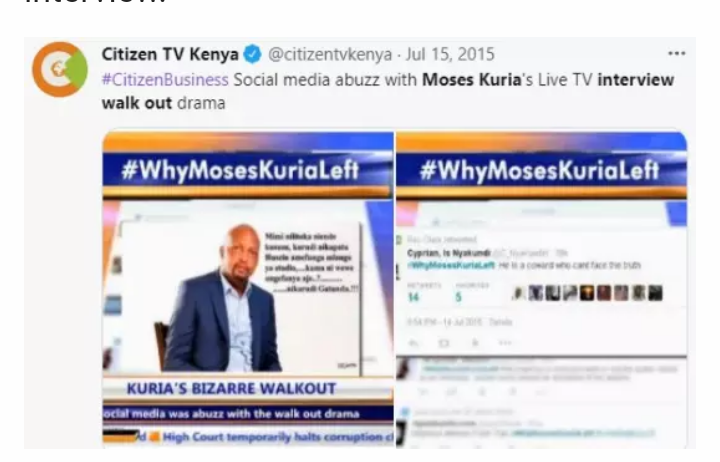 Machakos Governor Dr Alfred Mutua walked out of KTN News live interview after he came face to face with two MPs from his county.

The governor may have erroneously believed that he was to debate self in the show. He was shocked to find two of his fellow Masaku leaders Messirs Hon Francis Mwangangi (Wiper Yatta ) and Hon Peter Mathuki (Wiper EALA) who were on set ready to debate on his record, the uphill task he was to face to get re-elected in 2017 and presidential vote in 2017.

Since the governor’s development record was busted as hoax that was previously sustained by PR stunts he may have felt awkward to debate the sober MPs who were in touch with reality on the ground.

Governor Mutua had assumed that he was to be a sole guest to load over Kenyans about his so called Jubilee Maendeleo chap chap and also bash the CORD leadership.

He had earlier in the day taken to social media where he urged his fans to watch KTN News where he was to be hosted by bootful Linda Ogutu on Kinyanganyiro 2017 a talk show that focused on the 2017 elections. To Governor Mutua, this was an opportunity to showcase his PR stunts un-vetted.

In 2017, the then- Starehe Parliamentary aspirant Boniface Mwangi walked out of a TV interview on K24 citing false advertising.

Mwangi had been invited alongside his rivals for the seat Steve Mbogo of ODM Party and Jubilee Party candidate Charles Kanyi Njagua aka Jaguar.

Only Mwangi showed up for the show, with Jaguar apparently declining the invitation while Mbogo failed to show up and did not give any explanation.

Explaining his move to walk out of the set, Mwangi tweeted: "I walked out because of false advertising. The invite didn't mention Brian Weke. They wanted me to debate Brian Weke , he isn't an aspirant."

I have walked out of @K24Tv. They ran this AD,Njagua declined.Mbogo didn't show up,they wanted me to debate Brian Weke who isn't an aspirant pic.twitter.com/eHXRLuZcOU

According to the show host, journalist Ian Wafula, the three were to be interviewed along with political activist Brian Weke who was to be an analyst on the show.

Boniface had also previously walked out of set as KTN’s Jeff Koinange Live was on air.

This is after Gatundu South Mp Moses Kuria walked into the interview. The activist said there was no way he was going to share the bench with Moses Kuria pointing out that the lawmaker had in fact been accused of hate speech.

“Enjoy the Show men” he said in his parting shot.

Moses Kuria would later on joke about it saying he had forgotten to patent the stunt of “walking out of live interviews” because, he claimed, it was his thing.

Kuria was referring to his interview with Citizen Tv’s Hussein Mohammed where he walked out after a barrage of questions that he termed biased.

DCI Finally Reveals Face of The Man Who Killed Mugo in Mirema, Reveals His Name

The face and name of the man responsible in Mugoh's daylight assassination are revealed by the DCI.