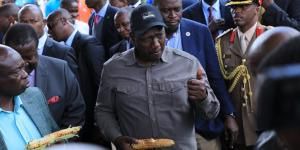 A group of journalists drawn from different stations appealed to President William Ruto to bail out struggling media houses.

Speaking on Monday, December 5, during an annual journalists meeting organised by Scribes Kenya, the media practitioners argued that Ruto's support was key to addressing the issue of mass layoffs, especially at Nation Media Group (NMG) and the Standard.

The fourth estate appealed to the Kenya Kwanza administration to increase the share of government funds allocated to media houses on advertisements.

"When other government corporations struggle financially, the government bails them out. So we appeal to the government since Ruto stated that he is the president of the vulnerable, to intervene to prevent the job losses," he added.

Led by BBC Africa's Roncliffe Odit, the journalists appealed to Ruto to include media houses when rolling out mitigation initiatives.

"The government must also support media houses by giving out advertisements," Odit insisted.

He, however, challenged journalists to devise other ways of telling their stories with more creativity to beat competition from mobile journalism and the wide use of the internet.

"Every journalist should strive to write value addition stories since everyone is consuming content online. They must also pursue other follow-up story angles to inform the readers who are anxious for fresh content," Namlola stated.

"We are concerned about the surge in laying offs of journalists by media houses. While times are undeniably hard, and technology is changing, mass firings should not be the first line of intervention," Owalo stated.

Among the journalist who were affected by the layoffs included Mark Masai. Dennis Okari also announced his exit from NTV on Monday, December 5.