The State is Corrupt! Sonko Daringly Exposes the Millions Paid to the Senate for His Impeachment

By News_Bulletin (self media writer) | 1 year ago

Governor Sonko has now been reduced to fighting a lost battle, a battle which seemingly he was never meant to win. His impeachment according to him was planned by the State. Politics is indeed a dirty game. 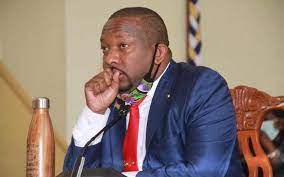 While Sonko was struggling to fight for his fate as the governor, major plans were underway to kick him off by the State. According to him the senators were under pressure by their political bosses to have him impeached. Sonko explains the sad story stating that this was due to him not being born in the Statehouse just like the others, poor Sonko! Apart from that Sonko reveals that the state had to pay Kshs 2,000,000 to the senate in order to have him impeached. 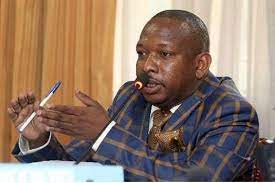 "Some of my former colleagues in @Senate_KE had to sacrifice me coz of political pressure from their party bosses who personally called them one by one to impeach me because I was not born in Statehouse and my father was not President nor Prime Minister and Vice President as well. During the voting exercise Ksh 2 Million was offered by state for Christmas so that the law can be breached." 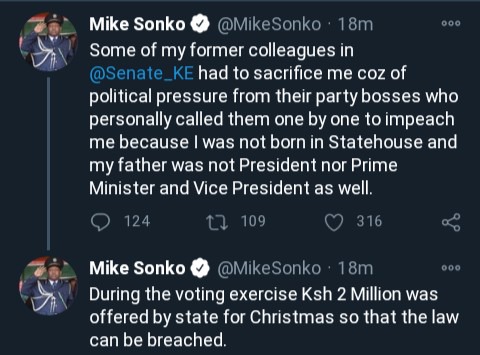 Content created and supplied by: News_Bulletin (via Opera News )

" Our Brother Left Us, I Was Ready To Work With Mudavadi, I'm 68 Years Old, " Kalonzo Laments