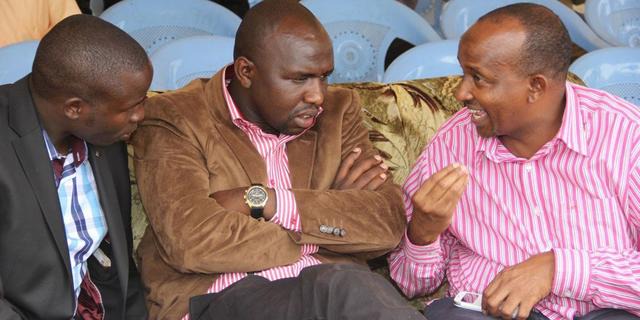 Both Karua and Mutua in separate statements on Friday, criticized outgoing deputy president William Ruto for welcoming new members to the Kenya Kwanza Alliance, few days after he was announced as the president elect, arguing that he was out to take the country back to the one party era.

They also stated that the law has legally bound those in the Azimio camp to that side, and there is no way they can be in two coalitions at the same time.

Taking to their Twitter accounts in response to the duo's remarks, Murkomen and Duale defended Ruto and his team, saying that they are out work with everybody, and the Azimio team should not be complaining.

In his side Murkomen wondered why Karua was complaining yet her party, Narc Kenya, did not have anyone to defect to the KKA team.

"There is no single Governor, Senator, Member of National Assembly or Member of County Assembly belonging to Martha Karua or NARC Kenya who has joined President- Elect William Ruto or Kenya Kwanza. Why is my sister Martha Karua wailing," he posed.

Duale on his side said that the constitution allows anyone to join the party or political coalition of their choice, and urged the Azimio brigade to stop playing mind games with Kenyans.

Ruto has in the past few days welcomed a section of the members of parliament elected as independent candidates, some MPs from UPIA, KANU, and also United Democratic Movement UDM party which is led by outgoing Mandera Governor Ali Roba.