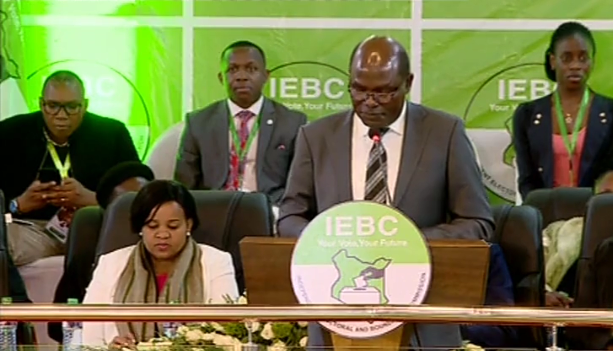 Several leading television stations plus radio stations are carrying out their own tallying of the presidential election results. According to the stations, the results are based on form 34A's that are accessible at the commission's public portal.

During the 1430hrs press conference, Chebukati was asked to give his word on the results that are being shown and announced by these stations.

In his response, Chebukati said that the results may be correct since they are based on its data on the public portal but revealed that they're 'too behind'.

"Those are the results. There are no other results but they are too behind. You should be at 97%. Maybe the media was not prepared," said Chebukati.

From the response, it's clear that presidential results from upto 97% of polling stations are already in but the media results have not captured the results upto this percentage. Most of the results being shown on television stations show a total of less than 50% percent of the votes cast.

Probably, the results being shown on TV may change or remain the same if updated.