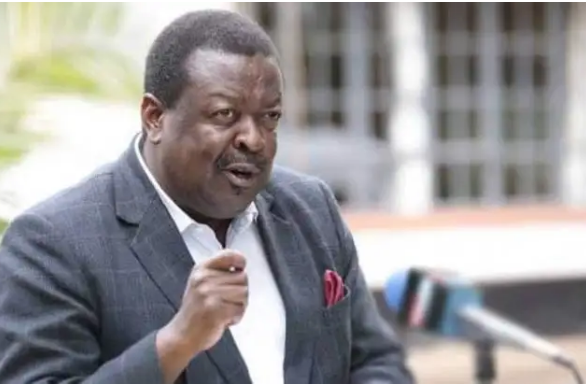 Edwin Sifuna who the Orange Democratic Movement party Secretary General has scoffed at Musalia Mudavadi who is the Amani National Congress party leader's claims that his announcement on 23rd of this month is set to cause an earthquake.

Rubbishing the notion that anything of significant magnitude can come out of the forthcoming announcement, Sifuna nevertheless revealed the one thing which would indeed shake the country if Mudavadi announced it.

Others on the citizen TV's Daybreak show were the ODM Secretary General was Kakamega senator Cleophas Malala and Beatrice Elachi, Chief Administrative Secretary in the ministry of Public Service and Gender Affairs.

Edwin Sifuna stated that ANC party leader hon Musalia Mudavadi's promise that his announcement would result in an earthquake wasn’t to be taken seriously, and that it wouldn’t cause even a tremor, let alone a quake.

Malala took offence at this and swiftly corrected him, reminding Sifuna that Mudavadi has covered the length and width of the country popularising his presidential bid.

Amani National Congress (ANC) leader Musalia Mudavadi had earlier said that he would make a declaration on January 23rd that will shake the entire country.

Mudavadi who was at the time on a tour of Nyamira was speaking to the media on Sunday 16th, where he said his declaration during the ANC National Delegates Conference will alter Kenya’s political setting as well as give direction on his political future.

Mudavadi urged Kenyans from across the country to make sure they are near a TV set on the material day, to be part of the history that will be made.

At the same time, Mudavadi said he was not worried that other OKA pricipals are also eying the country’s top job.

He asked Kenyan to to stop reading too much into it, arguing that KANU had already declared their Presidential candidate ahead of a joint nomination.

How Slain Thug Mugo Managed to have over 300 bank accounts