Former Bungoma deputy governor Hillary Chongwony has ditched the Kenya Kwanza Alliance camp that is led by Deputy President William Ruto and joined the Azimio La Umoja One Kenya Alliance that is led by Raila Odinga.

Speaking on Sunday during a rally in Mt Elgon, Chongwony claimed that his former boss, the Speaker of the Senate Ken Lusaka who is seeking to recapture the seat in August under the Ford Kenya party, has betrayed him since he thought he would choose him as his deputy.

"We have seen what has happened few days ago, but the best thing was if he wants to contest again, he should have settled on me since we worked together," said Chongwony who has since joined hands with Azimio's candidate, incumbent Governor Wycliffe Wangamati.

This comes almost two months after Sabaot elders endorsed Chongwony to be Lusaka's running mate, saying that the duo had a good working relations in their 2013-2017 term. 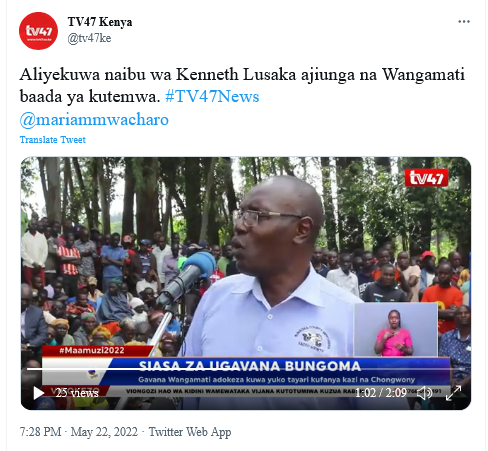 The elders criticized Lusaka claiming that he has let the Sabaot community down since he rejected Chongwony, and settled on Gender activist Janepher Chemtai Mbatiany as his running mate.

"We did not endorse a woman, we are not happy that he left our son. That is humiliation, and I am sure Chongwony is the only person who is coming to help our people," said one of the elders.

Wangamati on his side affirmed that he will ensure that the interests of the people from Mt Elgon are taken care of in case he is re-elected in August.