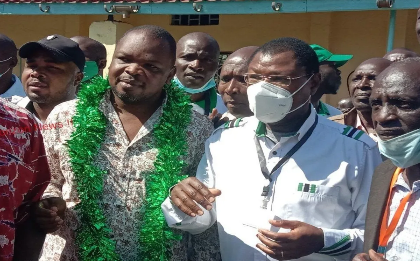 While addressing the residents, Kalasinga stated that Ruto stood with him despite the United Democratic Alliance party fielding a candidate, and he will in turn reciprocate the support.

This elicited mixed reactions, more after he stated that he had brought greetings from Wetangula, who has in several occasions denied been linked to the DP.

As quoted by the Standard, Wetangula's aide Wafula Wakoli dismissed Kalasinga's remarks stating that the Ford Kenya was in One Kenya Alliance, as it was rallying behind their party leader, Moses Wetangula.

He further termed the MP's sentiments that he was sent to deliver greetings as untrue, and not the view of Ford Kenya or Wetangula's.

"We want to say that those sentiments by Kalasinga were his own and not those of the Lion's party. Our party is firm under the able leadership of Wetangula and we are working with other leaders of One Kenya Alliance to take our people to State House come August next year," said Wakoli.

A Win For Ruto As A Kieleweke Leader Changes Tune On His Presidency, Makes This New Declaration