By Soccer,AthletesNews.com (self media writer) | 3 months ago 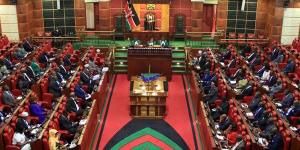 The National Assembly has approved a bill allowing the President to pick Cabinet appointees from Parliament.

The Constitutional Implementation Oversight Committee (CIOC) chaired by Ndaragwa Member of Parliament, Jeremiah Kioni, approved it following Speaker Justin Muturi’s ruling that no amendments can be proposed to a Bill seeking to amend the Constitution.

The Bill proposes that Cabinet Secretaries be picked from among MPs as opposed to the current arrangement where they are drawn from technocrats.

“Committee, noting the proposals from the public and having considered the same together with the Court of Appeal decision in Civil Appeal no E291 of 2021 over the constitutionality of the Building Bridges Initiative (Constitutional Amendment) Bill 2020, recommends that it be adopted and passed without amendments,” read the committee’s report in part.

Also, at the county level the governors will appoint Members of the County Assembly (MCAs) to their Cabinet.

Parliamentarians noted that having Cabinet Secretaries in Parliament would enhance accountability among them and County Executive Commissions, as ministers appointed from outside the House owe allegiance to their appointing authorities.

They also noted that ministers appointed from Members of Parliament would be more sensitive to issues affecting citizens because they are directly accountable to the public.

Recently Deputy President, William Ruto, castigated the Legislature's move, accusing them of wasting time as they attempt to amend the Constitution.

The MPs argued that the Bill would help reduce the cost of running the government through reduction of wage bills due to the fact that MPs and MCAs will serve as CSs and CECs.

They added that ministers would only be entitled to a responsibility allowance in addition to their salaries, as opposed to the current structure in which they are entitled to salaries.

The committee highlighted that they as the body overseeing budget making would ensure balanced development in representation areas.

The bill also seeks to allow the President to assign the Attorney General duties of a Cabinet Secretary.

The Committee added that despite the AG having a constitutional mandate as the government's chief legal adviser, there was a gap in law that required him or her to be assigned responsibilities of a CS without being named one.