By Gspot (self media writer) | 5 months ago

The former Prime minister Raila Odinga has become relevant in the Kenya's political atmosphere for many decades so far. His relevance has never been Deminished by any forces as he has promised Kenyans a political Tsunami. Many have been longing to witness this in the Kenyan politics The former premier has gained much political support from his previous political rival and president Uhuru Kenyatta. This began when they both shook hands with an aim of uniting the country from post election divisions and violences that was witnessed in 2017.

This handshake brought divisions between the president and his deputy. Kenyatta inturn resolved to fully support Raila's bid to statehouse against his deputy. He went forward to forming the azimio la Umoja movement, a political vehicle that Raila will use to clinch the presidency.

It is expected that today 12th March 2022 will be Raila's Tsunami day as He is expected to be endorsed by the Azimio la Umoja brigade alongside 15 other political parties as their joint Presidential Candidate. 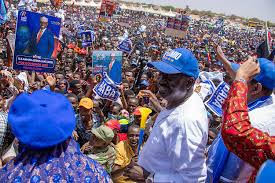 The documentation of the agreement is held at KICC. They will later hold a Tsunami rally at Jacaranda ground in Nairobi.

Do you think this political deal will last and thereafter bear fruits?

Content created and supplied by: Gspot (via Opera News )