By Mopabrants (self media writer) | 1 month ago Controversial Kenyan lawyer based in Canada Miguna Miguna has finally broken his silence after rumours that he was free to fly back to Kenya following lift on red alerts barring his travel.

In a late night post on his twitter handle,the estranged self proclaimed general has issued a statement to all Kenyan freedom fighters notifying them of the continued struggle.

He has also dismissed earlier reports that he was finally allowed to travel into Kenya saying president Uhuru Kenyatta has refused to obey court order directing them to issue him with travel documents.

He has warned the people not to listen to any other nefarious propaganda that may be spread concerning his return to kenya. 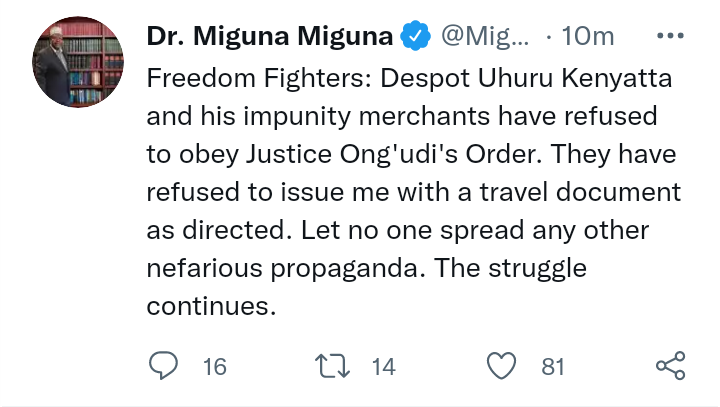 This comes after rumours spread on Thursday that the government had lifted the red alerts stopping him from boarding his flight to Kenya as directed by the court.

General Miguna was deported to Canada over treason allegations after he sworn in the former prime minister Raila Odinga as the people's president back in 2018.

Content created and supplied by: Mopabrants (via Opera News )

Your Butt Is Infected If You Experience These Signs and Symptoms