Friday: The Daily Nation And The Taifa Leo Newspapers Headlines

By Cakenews (self media writer) | 1 year ago 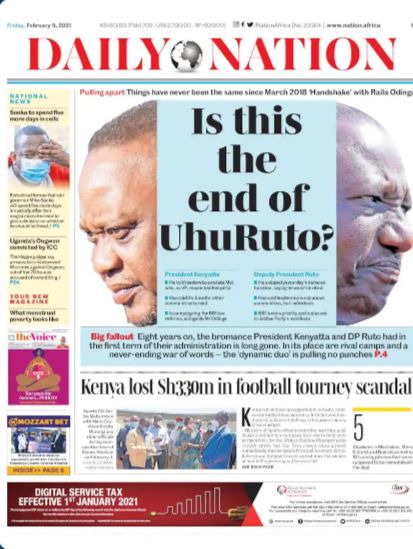 Daily Nation: Is this the end of UhuRuto?

Eight years on, the bromance President kenyatta and DP Ruto had in the first of their administration is long gone,they are now on rivals with with never ending war of words.

Uhuru who had promised to support Ruto has now said its time for other communities to rule,signaling he will not support Ruto. On the same,he has urged other leaders to emulate Moi who respected kenyatta when moi was the vice president.

Kenyatta is also seen pushing for constitutional reforms under the famous Building Bridges Initiative,he is doing so with the former prime minister Raila Odinga.

On the other hand,the second in command has said the Building Bridges Initiative is not a priority to kenyans,its not in Jubilee Party Manifesto hence a waste of time.

Yesterday, Deputy President William Ruto missed the Kabarak function. Ruto claimed that he was not invited to the function. This reveals how the second in command is being left out on state functions. 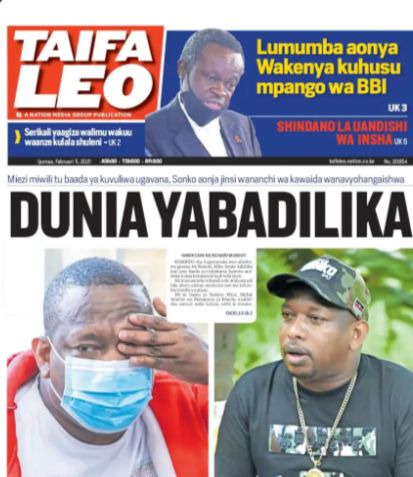 Two months since the former Nairobi governor Mike Sonko was impeached,he has gone through several challenges as be feels how the common Kenyans goes through painful challenges when arrested.

Sonko had stayed behind the scenes since Monday and now the court has ordered Mike Sonko to be detained until next week. This means Sonko will spend the weekend in a cell until next week when he is likely to know his fate.

Content created and supplied by: Cakenews (via Opera News )