Outgoing Meru county governor Kiraitu Murungi has landed a job as a member of the Kenya Law Reform Commission.

The governor was sworn in in a ceremony presided over by the Chief Justice Martha Koome where she sweared-in the Chairperson and Members of the Kenya Law Reform Commission, a semi-autonomous agency under the State Law Office. 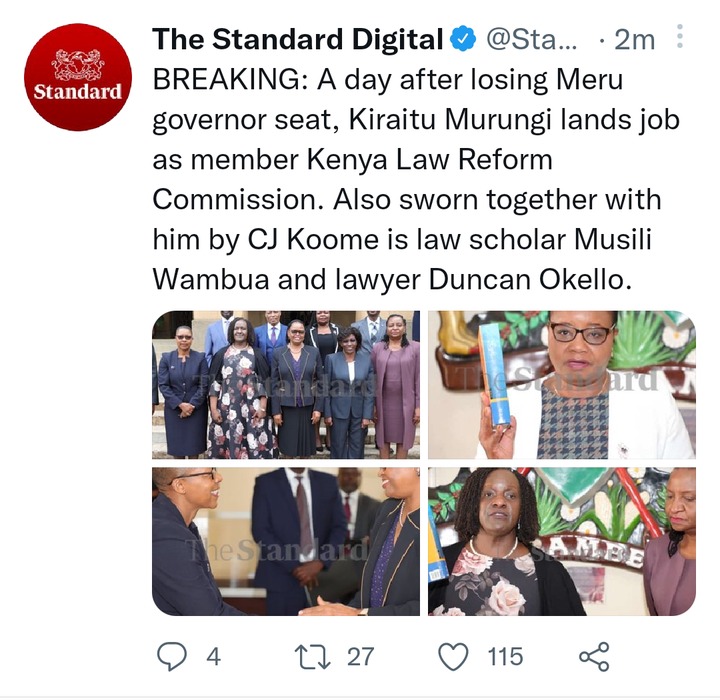 The Chairperson, Ms. Christine Anyango Agimba was appointed by HE President Uhuru Kenyatta for a period of six years with effect from 1st August, 2022.

After 30 years of conducting the Meru political orchestra, Kiraitu Murungi has tasted defeat for the first time.

Faith Kawira Mwangaza, the Woman Representative of Meru County, is the competitor who’s handed Murungi his first defeat.Mwangaza, an independent candidate, got 209,158 votes against Murungi’s 110,850 in the August 9, 2022 gubernatorial race.

Both Linturi and Kawira had accused the governor of nepotism in employment and award of tenders, poor delivery of services, and disrespect towards elected leaders.