There have been efforts by the clergy to reconcile President Uhuru Kenyatta and his Deputy William Ruto, who for some time now they have not been seeing eye to eye.

Genesis of the UhuRuto Fallout

The March 9, 2018, handshake between President Uhuru Kenyatta and his once-erstwhile rival Raila Odinga could be the lethal injection that killed the bromance the head of state and Deputy President William Ruto displayed ahead of the 2017 polls.

Raila’s entry into the Jubilee matrix largely complicated the DP’s stay in Jubilee. Cracks in the ruling party began to manifest.

The DP’s allies lamented there were hidden cards in the handshake at Harambe House doorsteps which swept away the tension at that time within seconds.

What followed was that the DP would stay away from key state functions – save for national holidays.

Less pictures of him together with Uhuru were published – unlike in the days of matching ties. 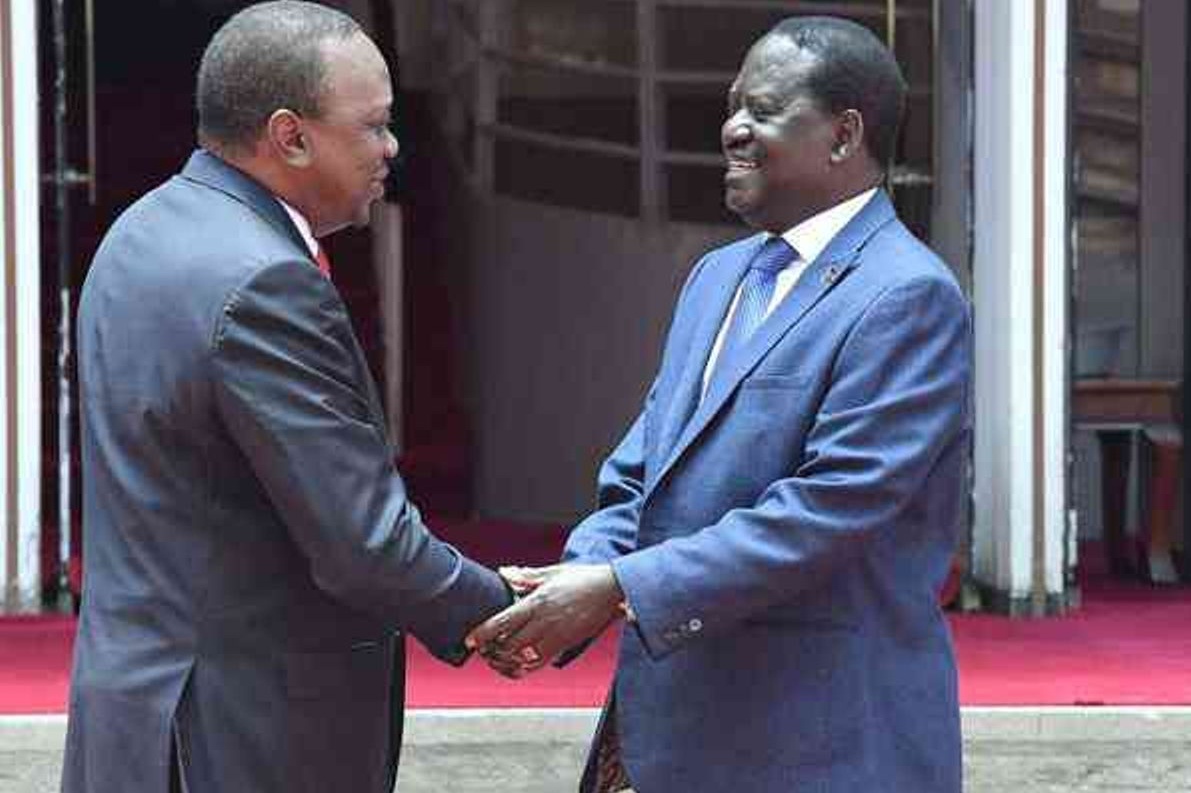 Many have argued that the wedge got wider after the DP somewhat defied President Kenyatta’s call for an end to politics to allow him to work and deliver his legacy.

The DP had at this time embarked on nationwide tours “inspecting development projects” – tours which earned his camp the name Tangatanga.

The President further banned launches of any project unless approved by the Cabinet committee chaired by the Interior CS. 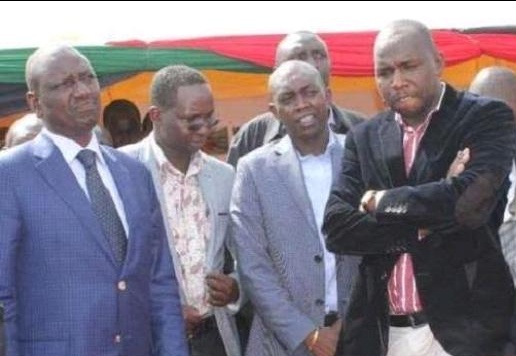 President Kenyatta’s allies fired warnings that the defiance would be punished.

Jubilee vice chairman David Murathe was blunt with the DP, saying he would not succeed President Kenyatta and that they preferred Raila.

Efforts to reconcile the two leaders:

Fast forward to September 2021, clergy leaders are of the thoughts that these two should bury the hatchet and reconcile to being the brothers they were before the fallout.

The clergy led by Retired African Inland Church [AIC] Archbishop Muheria have been on efforts to try and reconcile the two leaders. According to reports dated Thursday 16th September, Retired Archbishop Muheria is said to have held a meeting with President Uhuru and DP William Ruto separately to bring them together for a face-to-face meeting with sources disclosing that the meeting did not achieve much after both sides stuck to their hardened positions and declined to cede ground despite the spirited persuasion from the archbishop. 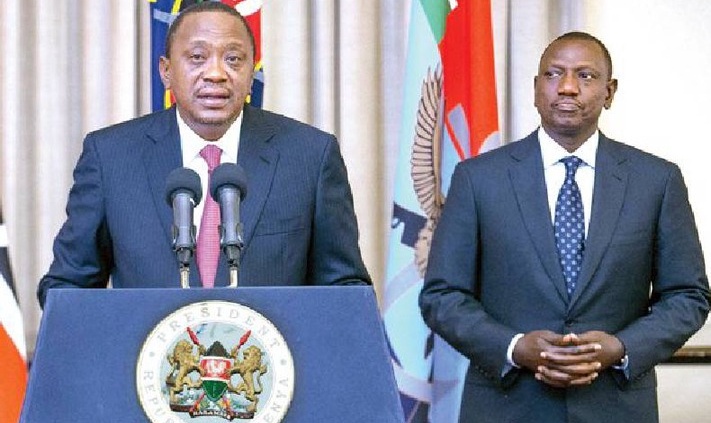 Sources aware of the last week's meeting have informed that efforts to reconcile the two leaders had “almost collapsed” because of irreconcilable differences between them.

It has been established that DP Ruto accused President Uhuru of shortchanging him on their 2013 deal as well as failure for the Head of State to acknowledge the role he [Ruto] played during Uhuru's race to State House.

The sources have also intimated that President Uhuru expressed his disappointment with his Deputy claim to a “shared presidency” including exploiting the 2010 Constitution that gives him immunity from being sacked, to allegedly disrespect the Head of State. 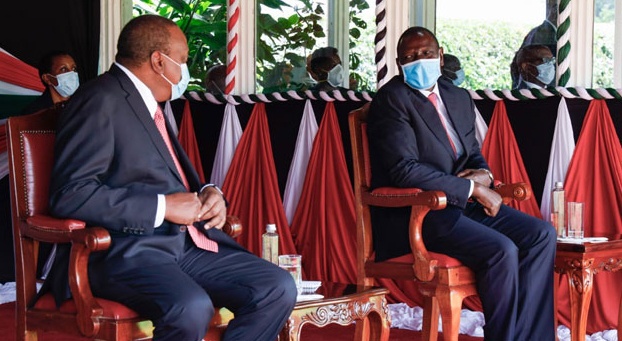 “Theirs is a problem that seems to have begun simmering almost six years ago before it erupted publicly in 2018. The differences have to do with something much bigger than what we know,” said the source as quoted by People Daily.

Uhuru also said Ruto’s jeopardized his development agenda by starting a premature campaign for 2022 and pressurizing him to support his presidential bid just when he was starting his second term in office.

"I am ready for a handshake" Ruto now says

A day after they both refused to find a similar ground, DP William Ruto has now changed his tune, speaking on Thursday the DP says he is now ready for a handshake with President Uhuru Kenyatta.

He welcomed the call made by Catholic Bishops to mediate talks with the aim of bringing them together, insisting that he is ready for the reunion process any time he is called upon. 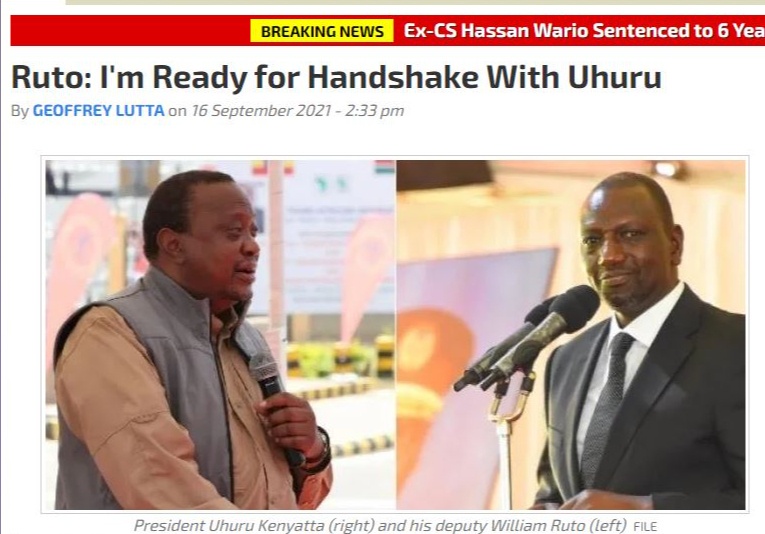 He blamed their fallout with the president on his political enemies, arguing that he still respect the head of state as his boss.

Ruto maintained that the reunion will enable him to help Uhuru to continue with the development agenda they promised to deliver to Kenyans.

"The bishops have said that they want to mediate talks to reunite me with President Uhuru Kenyatta. I'm ready for the talks without attaching any conditions. He is my boss," he stated.

He added," I am ready without conditions any moment because we were elected by Kenyans together and they gave us the responsibilities of running the government for the stipulated time."

He bashed at other lawmakers who had taken advantage of his drifting apart with Uhuru to ride on the government and its achievements asking them to wait till the 2022 General Election.

"You want to come and ride on a government you did not create. They should go out and seek those votes as we did and they will also find me outside there," Ruto remarked.

The bishops expressed concerns that disagreements between the two former political allies could result in political intolerance between their supporters spread across the country.

LATEST; Got Mahia Qualify For Next CAF Confederation Round