Oparanya endorses his deputy Prof. Kutima as the next Kakamega governor

By Chelangatdaisy (self media writer) | 11 months ago 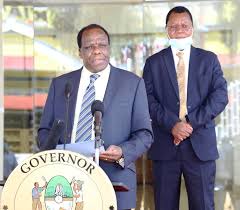 Wycliffe Oparanya, the current Kakamega governor, endorsed prof. Philip Kutima as the next governor. Prof. Kutima is the current deputy governor of the county.

Oparanya praised Kutima for his prolific job as his deputy in a bid to encourage citizens to allow Kutima to succeed him in 2020. The duo have been working for the past for years as they won two consecutive terms of the Kakamega polls. 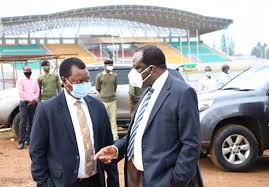 Oparanya added that he himself saw the leader Kutima was and that is why he choose him as his deputy and not for one but two terms. He further asserted that he doesn’t need to be convinced to vote for Kutima as he knows that he is fully capable of leading Kakamega to further greatness.

Kutima stood back smiling as Oparanya advised the citizens of Kakamega that there was no greater leader ready and more ambitious than Kutima. Most contestants were unreliable to lead Kakamega, claimed Oparanya, as they were likely to turn around their manifestos and seek after their own personal needs instead of the citizens’ interests.

Content created and supplied by: Chelangatdaisy (via Opera News )