Kivutha Kibwana Spills The Beans, Reveals The Man Who Will Compete With Ruto In 2027 For Presidency

Barely four months after the general elections politicians have started to make plans for the 2027 general elections which are five years away. This does not however surprise Kenyans since the country has been known to be politically active all the time. It is is not clear if Raila Odinga will be in the ballot to try his luck one last time but details have emerged of who Kenyans should expect in the ballot. 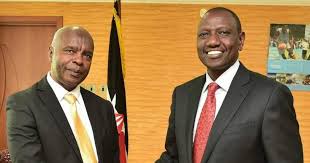 Former Makueni county governor Kivutha Kibwana has made it public that Wiper party leader Kalonzo Musyoka will be trying his luck this time against president William Ruto who will be defending his seat for another term. Kibwana in a statement on Monday said that Kalonzo will never win the elections even if he runs for presidency come 2027. Kibwana said that Kalonzo has said he would run for presidency since 2008 but has always ended up supporting Raila Odinga.

The former governor also hinted that Narc Kenya leader Martha karua has a plan of running for presidency in the coming general elections. Do you think Kalonzo will defeat William Ruto in the next general elections? Share your thoughts in the comments section.