By Moses Mwangi (self media writer) | 8 months ago 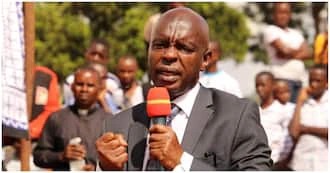 The county executive stated that their 2,5 million votes would have a role in the leader they chose in the August General Election.

Only the Ukambani people's determination and resilience, according to Kibwana, have allowed them to produce enough food to feed the country.

The Akamba community's vote will be heard at the ballot box on August 9th, according to Makueni governor Kivutha Kibwana.

Ukambani had been neglected for a long time, according to Kivutha

The county boss declared in a Facebook post that their votes and opinions on who should be Kenya's future leader would not be wasted like water pouring into the Indian Ocean from the River Athi.

He said that the neighborhood has 2.5 million registered voters and that anyone seeking to lead Kenya after August 9 would need them.

"God will provide an escape route for every challenge," Kalonzo Musyoka insists.

Since independence, Ukambani has pleaded with successive governments to alleviate their water problems, but they have been ignored, according to Kibwana.

He claimed that it was only through the people's willingness that irrigation and value addition were implemented, and that they were able to feed Kenya.

On Wednesday, April 20, Kibwana indicated that some Ukambani leaders were finding it difficult to engage with Kalonzo Musyoka of the Azimio One Kenya Coalition.

Analysts warn William Ruto against picking Kithure Kindiki as his running mate in the 2022 elections.

"Working with @skmusyoka in Azimio in Ukambani is becoming impossible." He wanted me in particular out of all Azimio structures after he joined us. I don't have a choice except to accept this awful fact. We will all be judged by history in the end. "May @RailaOdinga be blessed," he said.

Since joining the coalition, Kalonzo has wanted him out of all Azimio entities, according to the Makueni governor.

Content created and supplied by: Moses Mwangi (via Opera News )