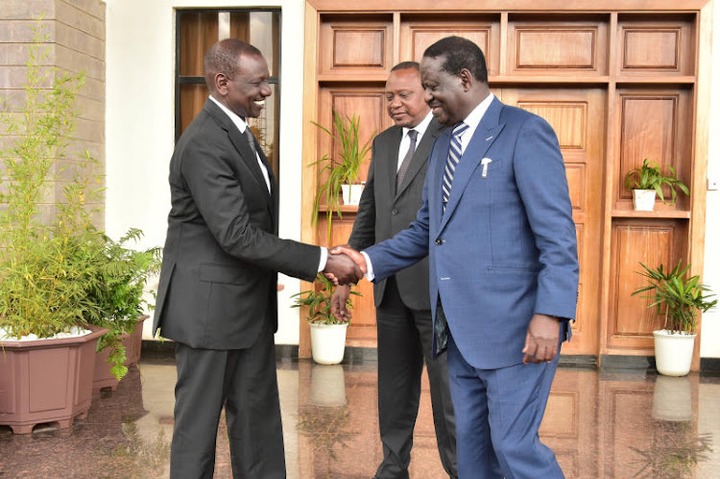 A turmoil of emotions spearhead the upcoming 2022 elections as seen by the dilemmatic choice for the president by the people. Two candidates with little to separate them .A draw of statistics rather but what is the word on the street?

ODM chief Raila Odinga has indicated that his sphere of interest is perpetuated on Kenya's most coveted seat; the presidency. Luck dwells in his vicinity as seen by his gradual rise in popularity in the Mount Kenya region, an area considered a hard-shell. His slogans call for a peaceful postelection atmosphere something that all Kenyans need in the wake of the 2022 title race.

The ODM boss has his arsenal at the highest tier ready to thrust forward and inherit president Uhuru Kenyatta. The handshake is another important pillar of consideration of his candidature. Though he lost to president Uhuru, his rejuvenated stamina has been strongly supported by the president himself.

Raila, in a meeting clearly spilled on Ruto being the center of Jubilee failures and has nothing new to offer Kenyans. Citing Ruto's promises to offer Kenyans a million jobs and sport complexes ,Raila said Ruto forgot his promises to Kenyans. President Uhuru Kenyatta conceded on taking the wrong path and backed Raila's strategies for Kenyans.

On the flip side ,Ruto's delegates spoke on leadership equality citing that two communities have had the mantle for over five decades .''It is about time that other communities get to seat on the throne, 'he said.

For now ,it is uncertain if the ODM boss will contest but a nostalgia of signals emanates from his side. He also calls for the BBI approval which brings along an accountable government. All we can do is hope for the best government there is, Ruto or Raila.

Content created and supplied by: THE_LAST_MAU_MAU (via Opera News )

Nairobi Set To Officially Have A New Governor, Court Of Appeal Judges Rule