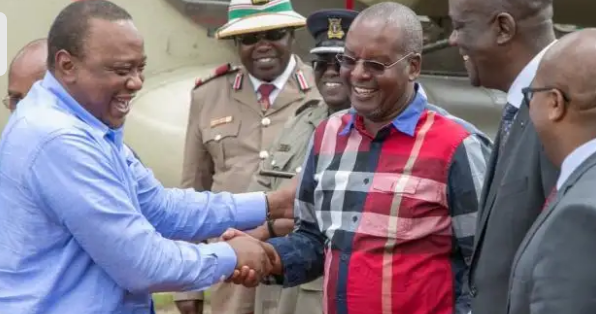 Kipipiri Member of Parliament Amos Kimunya has revealed that leaders supporting President Uhuru Kenyatta have been tasked to ensure that ODM leader Raila Odinga get as many votes as possible from the Mt Kenya region in the August General Elections.

Kimunya alongside other leaders from Mt Kenya vowed to marshall to voters from their region to support Raila, who they said is gaining popularity in their political backyards.

“As leaders from the mountain, we have fully committed to mobilising our people to get national cards and voters’ cards ready to ensure Raila clinches the presidency,” Kimunya said.

“Our call as leaders from Mt Kenya now is to convert the people who were lured into supporting ‘wheelbarrow to the Azimio side,” he added.

Kimunya was speaking in Siaya where he led a couple of Mt Kenya leaders who on paid a visit to Siaya Senator James Orengo at his home in Nyawara village in East Ugenya.

The majority leader in the National Assembly further revealed that their mission is not to ensure their supporters come out in big numbers and register as voters so that they can ensure the Azimio team wins the elections in August this year.

On his side, Jubilee nominated MP Maina Kamanda who was also present at the meeting noted that the people of Mt Kenya have never had a significant difference with the Luos hence it will be easy to convince them to vote for Raila.

Kamanda further claimed that Deputy President William Ruto has not had much significance to Kenyans apart from allegedly being behind major corruption scandals that have rocked the country.

According to the controversial lawmaker, Raila only needs 30 per cent of votes from Central to ensure his victory as the next president of Kenya.

Kisumu Governor Blocks Politicians From Campaigning in CBD and Its Environs