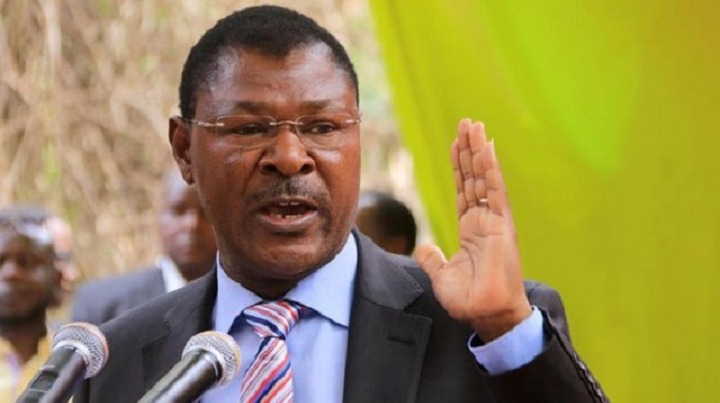 Ford Kenya party leader Moses Wetangula has criticized the Azimio La Umoja One Kenya Alliance flag bearer Raila Odinga for saying that he will boycott the August 9 polls if the Independent Electoral and Boundaries Commission, IEBC do not meet his demand of having both manual and electronic voters register.

Raila who was speaking on Wednesday during Azimio rally in Kiambu County argued that having a manual register in all polling stations is not negotiable between IEBC and the Azimio team, and if that will not be met, they will boycott the polls.

Taking to his Twitter account on Thursday morning, The Bungoma Senator dismissed Raila's claims saying that he has always been giving threats in all the past elections, and this was not an exception.

"Political archives show there is no election the ODM candidate has contested without irritatingly shouting against the referee. Even when Supreme Court handed him a second chance, he shouted at IEBC and walked off," he tweeted. 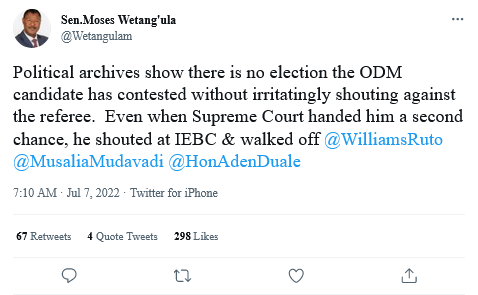 Wetangula's remarks also came after the Azimio's coalition council secretary general and Suna East MP Junet Mohamed argued that the Senator has been working with IEBC over printing of the ballot papers in order to favour Deputy President William Ruto.

Wetangula who is now supporting Ruto's presidential bid dismissed the sentiments saying that he has not worked with IEBC and the Azimio team were only propagating fake news since the had sensed defeat.

Ruto and other leaders allied to the Kenya Kwanza Camp came to the rescue of Wetangula saying that their team knows that the IEBC is an independent body, and are not interfering with his duties, saying that it was now evident that Raila and his brigade have realized they will be defeated in the presidential race.