The Kenyan ministry of health has finally opened up about the ongoing debate where alot of Kenyans wanted to know the cause of death of a kenyan woman who is reported to have died after receiving the Astra-Zeneca vaccine which is commonly referred to as Covid-19 Vaccine.

In a report that hit alot of Kenyans by surprise after hitting different media houses in Kenya, it was reported that a woman whose name was kept hidden for security reasons allegedly died after receiving Covid-19 Vaccine in one of the hospitals in Kenya.

This was followed by a dramatic scene after alot of Kenyans took to their different social media accounts to express their fears and concerns wanting to know what might have caused the death of the woman after speculating that there might have been something wrong with the vaccine.

However, while addressing this issue, the ministry of health has revealed that the deceased had an underlying illness which was in its peak and so manifested itself after the deceased received the Astra-Zeneca jab.

They went ahead and admitted that there were a couple of other Kenyans who claimed that they fell ill after taking the vaccine but also added that all of this was a side effect and so there was no need for Kenyans to panic.

The incident has since sparked alot of mixed reactions from Kenyans who seemed to have different opinions and suggestions on the matter. With a section of Kenyans claiming that maybe the government was hiding something, others went ahead and called upon the agents from the director of criminal investigations to look into this matter before things get out of hand. 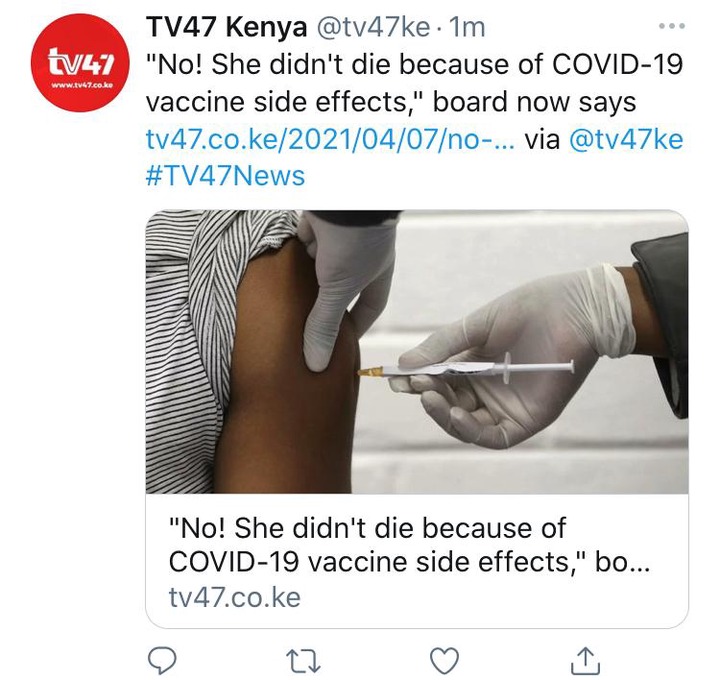 10 Best Foods To Boost Brain Memory You Need To Know

Kenyans Worried As the Positivity Rate Jumps to 13.2% and 965 Tests Positive for Covid-19 Today

Raila Odinga Reveals Why He Hosted a Delegation of Luhya Elders