I have the formula to win the presidency next year, says Wanjigi in Raila turf 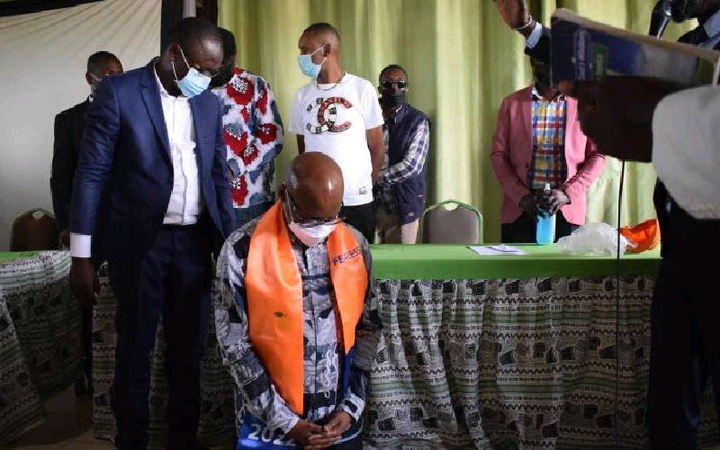 On September 16, 2021, ODM Presidential aspirant Jimmi Wanjigi kneels for a prayer during a gathering with ODM delegates in a Homa Bay town hotel.

He is, however, evasive about whether he will carry out his strategy for the 2022 presidential election or cede ground to another candidate.

Raila, who has yet to officially declare his candidacy for president but has begun campaigning on the Azimio la Umoja platform, will now compete for the party ticket in the primaries with Wanjigi, Joho, and Oparanya.

"We want our party to conduct legitimate nominations because that is one of the criteria that would allow ODM to win the presidency in the future election," Wanjigi added.

He claimed that his ambition to run against Raila in the election is merely a means of exercising his democratic right. “Raila is a buddy of mine, and this competition will not separate us,” he continued.

Wanjigi's intentions in the presidential race are still unclear, but his breakthroughs in the Nyanza area, Raila's backyard, raise doubts about what he is up to and his ultimate game.

He's gone by the name Jabari, which means "brave one" in Swahili, and the slogan "Fagia Wote," which means "sweep all of them."

Wanjigi's candidacy, he claims, calls on the government to mainstream economic rights. He has also questioned President Kenyatta and Raila's political cooperation on the path the Mt Kenya area should go.

"There is skepticism about the two presidents' political partnership. Uhuru should have started climbing Mt Kenya with Raila right after the handshake, in my opinion. "However, it is regrettable that he has not done so," Wanjigi remarked.

He claimed that a few Mt Kenya leaders had traveled the region and soiled Raila's name to instill voter apathy against him.

To shift the narrative, he urged the president to walk with Raila in Mt Kenya. "A few leaders spread political propaganda about Raila among the Mt Kenyans. Such leaders, in my opinion, should walk with him in the region to apologize for what they said about him to display true political friendship," he continued.

Wanjigi claimed that in his succession plan, the President should have shown Raila sincere political affection.

He claimed that events had surpassed political betrayal, therefore people should speak the truth.

"On the one hand, Raila is being referred to as my brother. Why hasn't he walked alongside Raila in Central to change people's views about the lies that have been spread by him? "We must speak the truth because the time for political betrayal has passed," Wanjigi concluded.

Wanjigi's aims were made clear during his trip to Nyanza: to restore order in the ODM party, strengthen it, and sell his candidacy.

"Kenyans require a larger and more prosperous Kenya. I am determined to have a larger cake to suit all Kenyans. "My motivation is not to eat the cake for myself, but to help the impoverished," Wanjigi explained.

Another question is whether Raila will back Wanjigi in the ODM primaries if he defeats him.

Second, will he be the first person to connect Mount Kenya and Lake Victoria?

Wanjigi is rumored to be affluent and capable of matching any politician's shilling for a shilling.

However, the billionaire has been accused of establishing duplicate party offices in Central Kenya and thereby shaking up the ODM from inside. However, there is little doubt that he was warmly welcomed by ODM delegates in Nyanza.

Within the party, there are also suspicions about his true motivations: meeting delegates across the country and carving out a niche for himself.

Kenyans are talking about Wanjigi for the first time, with some political commentators speculating that he is planning to run as Raila's running mate.

He urged on Sifuna to hold party elections as soon as possible ten days ago.

He also asked for a list of representatives from special groups from all counties who would attend the National Delegates Conference, confirmation of delegates' conference schedules, the dates and processes for party primaries at all levels, and any additional events the party plans to undertake.

"I've seen rumors in the media that ODM officials will be chosen by consensus; this is a clear breach of the party's constitution." It's ambiguous, incorrect, and unclear.”

Some party members may be concerned by Wanjigi's recent activities, raising the question of whether he can persuade ODM followers to back him.

With the idea that he has resources, there are concerns inside the party that he will be able to put together a better-organized team of grassroots officials. Some party leaders will be troubled by speculation regarding the existence of a second aspirants' list.

Officials from the ODM have previously recognized that the party may have been unable to win some elective seats due to a lack of free and fair nominations.

Wanjigi contends that Kenya requires new blood in the form of politicians capable of transforming the economy and that long-serving lawmakers should step down in 2022.

"The only way to salvage our country is to get rid of the old guard in politics and make room for new blood," he concluded.

Wanjigi also advised residents to ignore ethnicity when voting for the new president next year.